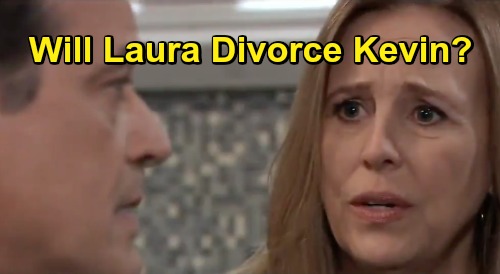 General Hospital (GH) spoilers tease that Laura Collins (Genie Francis) will struggle with her husband’s actions. Dr. Kevin Collins (Jon Lindstrom) has made some major mistakes, so his marriage is about to face a rough patch. Once Kevin tells Laura all the secrets he kept regarding Ryan, there’s going to be trouble. Kevin’s plan to rehabilitate Ryan led to the swap and got several Port Charles residents killed.

After Laura hears the whole story, she’ll have a hard time understanding why Kevin would keep Ryan’s survival a secret. Laura also won’t approve of Kevin taking such a huge risk. Kevin knew how sneaky his brother could be. Laura may think Kevin should’ve put Ryan in another mental institution as far away from PC as possible.

Ryan was posing as Kevin when he got Laura to sign those divorce papers, so Kevin and Laura’s marriage is still valid. Of course, that may not be the case for long if Laura can’t get past this. After all, Lulu Falconeri (Emme Rylan) nearly died because of what Kevin set in motion. Laura almost lost her own daughter, so that may be something that Laura’s haunted by. Can she move beyond all the pain?

If Kevin would’ve at least let Laura in on the secret, many months of General Hospital murder and mayhem might’ve been prevented. Maybe if Laura had known Ryan was alive, she would’ve alerted the police when “Kevin” started exhibiting strange behavior. Laura would’ve immediately guessed that a twin switch had gone down.

It doesn’t really matter when or where Kevin found Ryan. The point is he knew Ryan was alive. Kevin should’ve shared that with Laura, his wife who he’s supposed to trust. Kevin thought he could handle this on his own, but he was clearly wrong. He never expected Ryan to overpower him and take his place, but that’s exactly what happened. It was Kevin’s ill-advised plan that started this violent GH mess.

General Hospital spoilers say Laura may view this betrayal as a serious hurdle to overcome. Could Laura end up filing for a divorce? That’s not a decision she’ll take lightly, but it could happen if she can’t get over what Kevin’s done. We’ll give you updates as other GH news comes in. Stay tuned to the ABC soap and don’t forget to check CDL often for the latest General Hospital spoilers, updates and news.