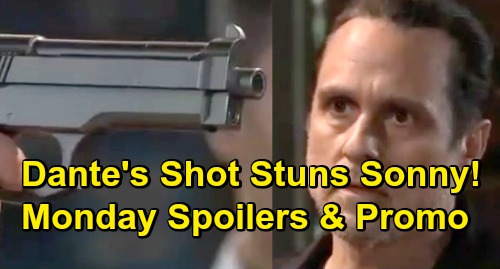 General Hospital (GH) spoilers for Monday, March 18, tease that Sonny Corinthos (Maurice Benard) will fear for his life. Part of him won’t want to believe his son could actually kill him, but he’s staring at a very different Dante Falconeri (Dominic Zamprogna) – or so it seems. Raj Patel (Noshir Dalal) just ordered Dante to prove his loyalty and murder his father, but GH isn’t really going to kill Sonny off.

Dante’s just putting on a show for his boss’ sake, so he’ll come up with an alternative solution. General Hospital spoilers say he’ll indeed fire a shot in Sonny’s direction, but it looks like he’ll miss intentionally. Dante will explain to Raj that Sonny has certain skills that could be useful. He’ll contend that his dad would be worth more alive than dead.

Raj may be a bit skeptical, but he’ll eventually go for the idea. It’ll buy Dante some time until he can figure out what to do next. Back in Port Charles, Lulu Falconeri (Emme Rylan) will worry about her husband. She’ll tell Maxie Jones (Kirsten Storms) that she just wishes Dante were home. Lulu will hate not knowing whether Dante’s safe or even alive. She’ll get some support and just try to hang in there.

Over with Michael Corinthos (Chad Duell) and Carly Corinthos (Laura Wright), they’ll take Mike Corbin (Max Gail) out for a meal. Carly and Michael will think Mike might enjoy some barbeque, but he’ll have a rough time away from the memory care center. Mike will get agitated as he insists he needs to go NOW. They’ll do their best to calm Mike down until they can get him back to Turning Woods.

Meanwhile, Sasha Gilmore (Sofia Mattsson) will approach Peter August (Wes Ramsey). She’ll think they need to talk about her “mother’s” wedding. Sasha will have a deep conversation with Peter about Nina Reeves (Michelle Stafford) and her future with Valentin Cassadine (James Patrick Stuart). She may wonder if there’s any way to stop this, but they’ll ultimately agree that Nina’s happiness is what’s important.

Other General Hospital spoilers say Jordan Ashford (Briana Nicole Henry) will push for honesty. She’ll feel like there’s something on Curtis Ashford’s (Donnell Turner) mind, so she’ll want to discuss it. Curtis will make an admission, so this may be about Jordan’s health. He might be concerned that Jordan will try to go back to life as usual, but she can’t do that thanks to her kidney issues.

Jordan may promise to take it easy until she can get the kidney transplant she needs. However, she’s not some fragile flower, so she won’t want to be treated like one. Jordan will make it clear that she’s a tough cookie and will get through this.

Finally, Alex Devane Marick (Finola Hughes) will head back to Port Charles. Just like the other twins involved in the memory study, Alex has gone blind. She’ll get some help from Dr. Hamilton Finn (Michael Easton), but Anna will expect some answers in return. At GH, Anna will demand to know which part of her life actually belongs to Alex.

General Hospital spoilers say Alex will mention a mission that Anna believes she botched. It’ll be something GH fans have never heard about, but Anna will recall it with clarity. She’ll confess that her failure has haunted her for years, but it turns out Alex was the one who flopped.

Anna will want to know the other false memories, but Alex will only offer one cryptic hint. There’s a good chance it involves Peter, who will be revealed as Alex’s son down the road. We’ll give you updates as other GH news comes in. Stay tuned to the ABC soap and don’t forget to check CDL often for the latest General Hospital spoilers, updates and news.