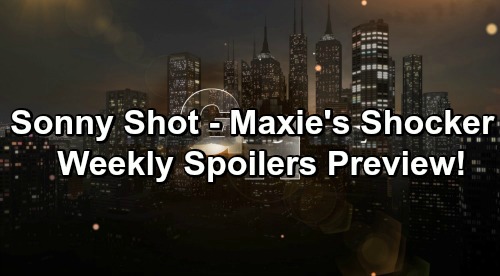 General Hospital (GH) spoilers for the week of March 18-22 tease that some confessions are coming up. For starters, Michael Corinthos (Chad Duell) will confide in Sasha Gilmore (Sofia Mattsson). He might allude to his terrible dating decisions in the past or even open up about losing his son. Whatever info Michael offers should make him even more appealing to Sasha.

GH fans can also expect a deep conversation between Sasha and Peter August (Wes Ramsey). Sasha is in on a fake daughter plot with Valentin Cassadine (James Patrick Stuart), but she’ll keep up the lie this week. Peter may warn Sasha about hurting Nina Reeves (Michelle Stafford), but Sasha will insist that’s not her intention. She’ll make it clear that she cares about her “mom” and wants to keep connecting.

Over with Maxie Jones (Kirsten Storms), she’ll get a nice surprise. Thanks to some presumably rigged DNA results, Maxie should be able to put her concerns about Sasha to rest. She’ll breathe a sigh of relief with Lulu Falconeri (Emme Rylan) by her side. It sounds like Valentin’s plan will save him for now, but it’s just a matter of time until Nina learns the truth.

Meanwhile, Elizabeth Webber (Rebecca Herbst) will remain torn about Franco Baldwin (Roger Howarth). She loves Franco and wants a life with him, but how can she get past all the lies and secrets? Liz knows Franco was trying to help Jordan Ashford (Briana Nicole Henry) and the people of Port Charles, but he hurt his family deeply in the process. Trust has been shattered, so Liz needs time to think.

Drew Cain (Billy Miller) will offer guidance to someone this week, March 18-22, and it’ll probably be Liz. She appreciated Drew’s support after Franco’s guilt plea, so he’ll be happy to provide more. In Turkey, Sonny Corinthos (Maurice Benard) will be caught in a deadly situation. He’ll realize he could lose his life, but that’s a risk he’ll be willing to take for Dante Falconeri’s (Dominic Zamprogna) sake.

General Hospital spoilers say an undercover Dante will shoot Sonny, but the move could actually keep them alive. Over with Harrison Chase (Josh Swickard), he’ll have big plans for the weekend. Willow Tait (Katelyn MacMullen) will likely be part of those plans, but panic will hit before they can carry them out. There’s a good chance Willow will run into the one man she’d like to avoid.

Willow has a Dawn of Day tattoo, so she was obviously part of Shiloh’s exclusive circle. It looks like Shiloh was Wiley’s father, so it’s easy to see why Willow would want to give him up. General Hospital spoilers say Willow will make an impulsive choice after a run-in, so stay tuned for some exciting drama.

Elsewhere, Laura Webber (Genie Francis) will struggle to move past her anger. Dr. Kevin Collins (Jon Lindstrom) put so many lives on the line by keeping Ryan Chamberlain’s (Jon Lindstrom) survival a secret. People died because of Kevin’s deception and Lulu was almost one of them. General Hospital spoilers say Laura will have to decide if this is something she can get over.

Another great week’s ahead in Port Charles. We’ll give you updates as other GH news comes in. Stick with the ABC soap and don’t forget to check CDL often for the latest General Hospital spoilers, updates and news.