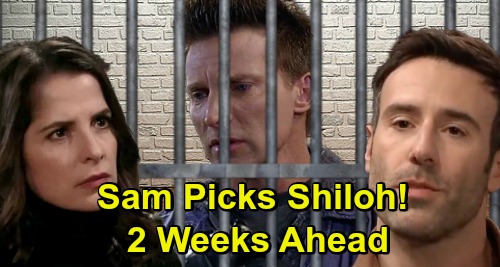 General Hospital (GH) spoilers tease that Shiloh Archer (Coby Ryan McLaughlin) will play with fire. He’ll test Jason Morgan’s (Steve Burton) patience and hope it works to his advantage. Shiloh may also be testing Sam McCall (Kelly Monaco) here. Part of him must be suspicious of her motives and lingering connection to Jason. Sam insists JaSam is a thing of the past, but Shiloh needs to know for sure.

That may be why Shiloh provokes Jason during the week of March 25-29. General Hospital spoilers say Shiloh will keep pushing and pushing. It sounds like Shiloh will get Jason so riled that he just can’t stand it. There’s a good chance Jason will throw a punch or two, but Shiloh may not fight back.

Dawn of Day is all about being in control of your emotions and destiny. Shiloh wouldn’t seem very in control if he started taking swings at Jason. Plus, he can use this as an attempt to drive a wedge between Jason and Sam.

Shiloh can be hard to read, so it’s tough to tell which way he’s leaning. It’s possible he knows Sam’s up to something, but he may be so smug that he thinks he’s duping her instead. However, it’s likely a bit of both. That brings us to the Sam suspicions we talked about. Shiloh may use this violent encounter as a way to judge Sam’s reaction and find out if she’s a friend or foe.

General Hospital spoilers say Sam will get some shocking news on March 25. She’ll hurry to Kelly’s, which may be where this faceoff takes place. Sam could easily get caught in the conflict. She might even be the one to break things up.

Since General Hospital spoilers state that Jason will get arrested that same week, it looks like Shiloh will press charges. He may urge Sam to back his claims, so she’ll probably land in a tight spot. GH fans can expect Sam to pick a side. She’s come too far to blow it all now, so she may stand against Jason.

Of course, this could lead to issues if Jason’s ready to bail on their plot and try another strategy. Punching Shiloh’s lights out obviously wasn’t part of the plan, so Sam could get upset over that. Jason and Sam have been a great team so far, but will Shiloh manage to come between them?