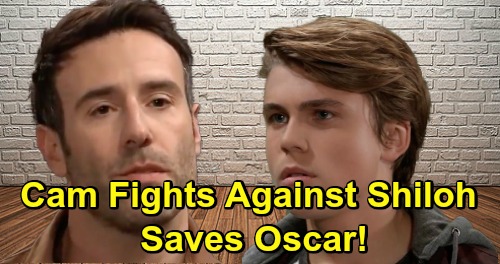 General Hospital (GH) spoilers tease that Jason Morgan (Steve Burton) and Sam McCall (Kelly Monaco) will focus on helping Kristina Corinthos-Davis (Lexi Ainsworth). She’ll do pretty much anything Shiloh Archer (Coby Ryan McLaughlin) says, so her situation is quite dire. Now that Kristina’s cutting off her friends and family, it’s time to rev up their takedown efforts and get rid of Shiloh for good.

However, there’s another vulnerable Port Charles resident who isn’t getting much attention. Oscar Nero (Garren Stitt) reached out to Shiloh offscreen in hopes of finding some help. Drew Cain (Billy Miller) and Dr. Kim Nero (Tamara Braun) deduced that Oscar is looking for a miracle. His false hope has left them heartbroken, but they don’t seem too concerned about the threat Shiloh poses.

It’s true that Shiloh tends to manipulate women more than men, but there’s a bit of a catch here. Shiloh has a history with Drew, which involves secrets he wants to remain hidden. It gives Shiloh a strong motive to tighten his grip on Oscar. He may want to keep Oscar close and invested in DoD. That way Shiloh can use Oscar as leverage if he fears his incriminating confessions are going to be exposed.

General Hospital spoilers say Willow Tait (Katelyn MacMullen) will be alarmed pretty soon. She’ll end up making a reckless decision that could end in disaster. On March 25, Willow will also make a startling admission to someone. All of this adds up to Willow running into Shiloh, who is most likely the real Wiley Cooper-Jones’ birth father. Willow may come clean about that to someone later.

That brings us to an interesting connection. On March 27, Elizabeth Webber (Rebecca Herbst) will get in touch with Willow. She may just want updates on how Aiden Webber’s (Jason David) doing at school, but it’s clear this won’t be the ideal time. Willow will be stuck in crisis mode, so it could lead to Liz being brought in the Shiloh loop.

When Willow first debuted, General Hospital spoilers suggested that several storylines would collide thanks to her. There’s a reason why Willow is Aiden’s teacher and Liz is getting pulled into all this. Will it bring deeper Willow drama? Will Cameron Webber (William Lipton) ultimately be dragged into this, too? Some new GH info may point in that direction.

General Hospital spoilers say Cam will face a stern warning on March 29. There’s no word yet on who will deliver it, but it’d be wise to bring him into the Dawn of Day story. Oscar is dying, but that doesn’t mean his loved ones want his life cut short. Cameron may worry if he hears Shiloh has weird treatment plans or is giving Oscar hope when he shouldn’t have any.

It’s easy to imagine rebel Cam confronting Shiloh and getting a warning in return. General Hospital could eventually let Cameron step up and play the hero. He might buy Oscar more days with Josslyn Jacks (Eden McCoy) and earn her deep gratitude. Of course, Josslyn would be petrified for both Oscar and Cameron first! If Shiloh gets too vicious, we could see total terror for these teens.

Do you think Cameron will save Oscar from whatever Shiloh has in store? We’ll keep you posted as other GH news comes in. Stay tuned to the ABC soap and don’t forget to check CDL often for the latest General Hospital spoilers, updates and news.