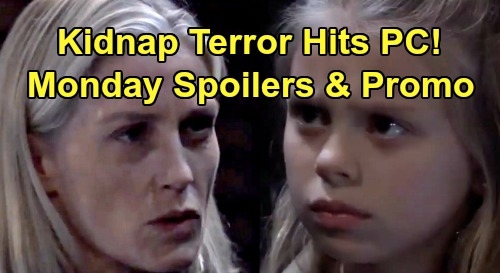 General Hospital (GH) spoilers for Monday, November 11, tease that Hamilton Finn (Michael Easton) will continue to connect with Violet Barnes (Jophielle Love). This kid will remain her usual adorable self, and Finn’s love for her will keep growing. Hayden Barnes (Rebecca Budig) will be happy to see how well Finn and Violet are getting along.

Unfortunately, Nikolas Cassadine (Marcus Coloma) and Jasper “Jax” Jacks (Ingo Rademacher) will be very much at odds across town. After Jax gets a visit from Jason Morgan (Steve Burton), this secret will really take a toll. Jax will hate lying to Carly Corinthos (Laura Wright) and Josslyn Jacks (Eden McCoy), so his frustration will finally erupt.

Nikolas will face Jax’s fierce outburst in Monday’s GH episode. Jax will shout that he didn’t sign up for this. He’ll undoubtedly be upset over Ava Jerome’s (Maura West) situation as well as the Cassandra Pierce (Jessica Tuck) drama that’s unfolding. This is a far bigger mess than Jax anticipated, so Nikolas will have to work to keep him quiet.

At Kelly’s, Lulu Spencer (Emme Rylan) will make a shocking discovery. She’ll be horrified when she realizes Charlotte Cassadine (Scarlett Fernandez) has disappeared! Once Lulu hears the news about Cassandra, it shouldn’t take long for her to put this together and fear the worst.

As for Charlotte, she’ll show some Cassadine spunk as she gives Cassandra an attitude. She’ll probably insist that her papa will rescue her, but Cassandra will insist no one’s going to find them. Charlotte could be used as a useful bargaining chip though, so it’ll be interesting to see how all this plays out.

Meanwhile, Laura Webber (Genie Francis) will clash with Valentin Cassadine (James Patrick Stuart) and Nina Reeves (Cynthia Watros) over the portrait. Of course, they’ll eventually get updates on Charlotte’s kidnapping and forget about everything else. Valentin will get an unsettling phone call, but will that be Lulu filling him in or perhaps Cassandra making demands? Regardless, Cassandra’s bound to get in touch at some point.

Other General Hospital spoilers say Liesl Obrecht (Kathleen Gati) will corner Brad Cooper (Parry Shen) and rev up the pressure. She’ll wonder what Brad’s done to cover his tracks. Liesl won’t want any details about the test tampering to come out, but Brad’s already confessed to Lucas Jones (Ryan Carnes). He’ll have to smooth things over with Liesl and hope she doesn’t correct his version of events!

At the cemetery, Lucas will get a confession from Julian Jerome (William deVry). Julian will admit he indeed blackmailed Brad and will defend his reasons. General Hospital spoilers say Lucas will decide he’s done giving Julian second chances. He’ll disown his father and leave Julian absolutely gutted, but what does that mean for Brad?

Julian will have to figure out how he wants to handle this, but it’ll be tricky due to the “Wiley Cooper-Jones” (Erik and Theo Olson) secret. The whole truth would break Lucas’ heart, but Julian won’t be keen on letting Brad emerge unscathed either!

Finally, Jason will clash with Jordan Ashford (Briana Nicole Henry) about something related to Sam McCall’s (Kelly Monaco) case. Jordan will insist that for Sam’s sake, Jason shouldn’t fight her on this. He won’t look happy about cooperating, but he’ll do whatever he has to do to protect Sam.

It sounds like some exciting scenes are on the way. We’ll keep you posted as other GH details come in. Stay tuned to the ABC soap and don’t forget to check CDL often for the latest General Hospital spoilers, updates and news.