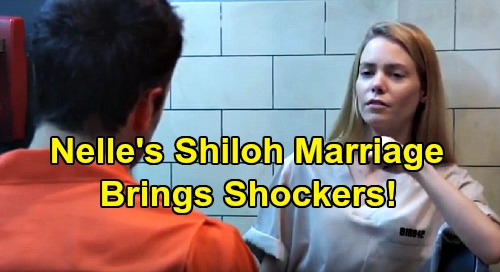 General Hospital (GH) spoilers tease that Nelle Benson’s (Chloe Lanier) secret husband could lead to quite a windfall. She filled Martin Gray (Michael E. Knight) in on her now dead hubby and what she stands to gain from that demise. Nelle didn’t come right out and say she married Shiloh Archer (Coby Ryan McLaughlin), but it’s obvious that’s who she ended up tying the knot with.

Nelle believes she’s going to come into a lot of money. This surely ties in with that conversation she had with Shiloh Archer (Coby Ryan McLaughlin) about the Quartermaines. Nelle felt the family owed her as well, so she undoubtedly set her sights on those ELQ stocks of Shiloh’s.

However, Oscar Nero Quartermaine (Garren Stitt) changed his mind and instructed Jason Morgan (Steve Burton) to use that money for a foundation. The Quartermaines have already vowed to challenge this gift and keep it tied up in court for years. Even so, Nelle’s brimming with confidence as usual and wants Martin to help her before the pot of gold slips away.

Martin Is Working for Valentin

Valentin Cassadine (James Patrick Stuart) has Martin on his payroll since he was Martin’s first call. Will Valentin use Nelle to get back at Michael Corinthos (Chad Duell) for supporting Sasha Gilmore (Sofia Mattsson)? That’s one possibility for GH viewers to consider.

Martin alluded to a project they’d previously discussed and added that a new avenue just opened up. There’s no word on what that means exactly, but the connection between Martin and Valentin is worth pondering. Is there a chance Nelle is Nina Reeves’ (Cynthia Watros) biological daughter? It’ll be interesting to see what revelations come out of all this.

Will Nelle Win Her Release?

Since Nelle just got turned down for parole, can Martin get her another hearing this fast? Nelle’s counting on Martin to help her score her freedom somehow. He’s got an incentive now that big money’s waiting on the other side. Martin even urged Nelle to call him “Marty” like his friends do. He’s definitely committed to scoring some serious dough, and Nelle is his ticket to that.

It’s easy to see why Nelle would want to marry Shiloh, but why would Shiloh want to marry Nelle? She made it clear that she didn’t buy his Dawn of Day garbage, so she was far from the vulnerable woman he tends to target. General Hospital fans know Nelle’s the kind of gal who holds her own.

Perhaps that was refreshing and appealing to Shiloh on some level. He may have seen the potential for Nelle to continue his reign of terror. Shiloh must’ve had an ulterior motive for joining forces with Nelle. She doesn’t have to keep her end of the bargain now that Shiloh’s dead, but she probably will if it involves chaos for the Quartermaines and the Corinthos clan. That was more of a mutual goal!