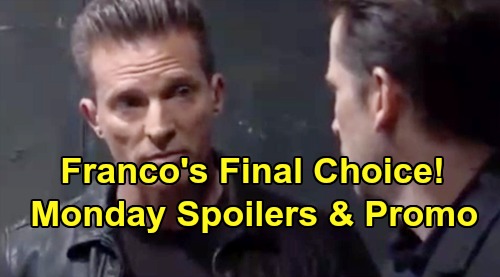 General Hospital (GH) spoilers for Monday, November 18, tease that some big developments are coming up in Port Charles. We should note that impeachment hearing coverage will be happening on Friday, November 15. It seems likely GH will be preempted once again, which should bump Friday’s episode to Monday.

Unfortunately, Sonny won’t be very receptive to Cam’s apology. He’ll look furious as he snarls, “You know what? It’s the safe choice!” Sonny may suggest Josslyn would be better off without troublemaking pals like Cameron. Limiting Joss and Cam’s contact could be the safe choice he’s talking about.

Whatever the case, Sonny should cool down eventually. Josslyn might enter the room and defend Cameron as best as she can. She made her own decisions that night and has to be personally responsible for them. It’s not like Cameron forced Josslyn to get drunk, so maybe Joss can convince Sonny of that.

Over with Anna Devane (Finola Hughes), she’ll wonder what in the world’s going on. Anna just walked in to find Hamilton Finn (Michael Easton) on the sofa with a scantily clad Hayden Barnes (Rebecca Budig). Hayden’s only wearing Finn’s shirt, so this obviously looks rather scandalous.

Finn and Hayden will have to explain, but it seems Violet Finn (Jophielle Love) may run in the room and force another explanation. Violet will ask if Anna’s a friend of her daddy’s, so Anna head should be spinning on Monday. At GH, Julian Jerome (William deVry) will check in with Alexis Davis (Nancy Lee Grahn). He’ll ask how Alexis is doing before shifting the conversation to something that’s been on his mind.

Julian will argue that it’s time they did something about Olivia Quartermaine’s (Lisa LoCicero) rats. He recently found a dead one in the alley behind Charlie’s Pub, so he seems to think it’s a vengeful move on Olivia’s part. General Hospital viewers know Julian and Olivia have a feud going on, so Julian may think Olivia’s taking this too far. He’ll want Alexis to play peacemaker for him, but he’s made some false assumptions.

Kendra Lennon (Michelle Argyris) tossed her “special” supplement in the garbage, so that puffed-up rat was feasting on poison – the same poison Alexis has been ingesting. Julian and Alexis won’t figure that out yet, but more clues are coming soon. In the meantime, Monica Quartermaine (Leslie Charleson) will speak with Kim Nero (Tamara Braun). They’ll exchange smiles as they talk about what’s next.

General Hospital spoilers say it looks like Kim will still be ready to leave town with “Drew Cain” aka Franco Baldwin (Roger Howarth). Monica will ask Kim to promise her they’ll live happy lives. She’ll just want “Drew” and Kim to find their own path to bliss somewhere.

As for Scott Baldwin (Kin Shriner), it appears he’ll finally accept defeat. Scott will approach Liz and somberly acknowledge that they fought hard for Franco. Liz will sport an expression that’s a mixture of angry, hurt and miserable. She’ll have plenty of emotions and thoughts swirling around as she deals with all this.

However, all hope isn’t lost! General Hospital spoilers say “Drew” will have a pivotal discussion with Jason Morgan (Steve Burton) on Monday. Jason will suggest that no matter what “Drew” chooses, someone he cares about will lose. “Drew” certainly cares about Kim, but he’s come to care about Liz and her boys, too. He can’t help but feel guilty for the sorrow they’re all facing.

Will that guilt be enough to change “Drew’s” mind? General Hospital spoilers say a major decision’s on the way for “Drew.” Since he already decided to leave Port Charles with Kim, it wouldn’t make sense for him to decide it again. It’s reasonable to assume “Drew” will have a change of heart and stick around.

“Drew” may also determine he should with the memory procedure after all. GH fans won’t want to miss the hot drama ahead. We’ll give you updates as other news comes in. Stay tuned to the ABC soap and don’t forget to check CDL often for the latest General Hospital spoilers, updates and news.