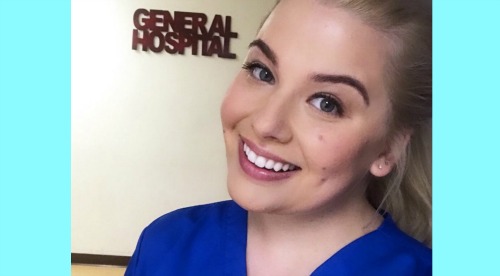 General Hospital (GH) spoilers reveal that a familiar face is set to pop up in Port Charles. It’s been a while since GH fans have seen Amy Driscoll (Risa Dorken), but Nurse Amy will be back on the scene soon! Dorken herself revealed the big news and offered viewers a reminder about the show’s schedule, which is getting a bit messy due to impeachment hearing coverage.

“Amy is back!” Dorken exclaimed on Twitter. “Super grateful to be back shooting in Port Charles! YAHOO! Stay tuned to @GeneralHospital (stream online + local listings if your show gets interrupted!)”

Dorken makes a good point since there could be several preemptions and episodes that get pushed back. We’ll keep you updated here at CDL and make sure you’re in the know about what’s going on. Thanks to the schedule adjustments, holiday episodes and previous spoiler dates will be a bit off. However, the important thing is all the usual Port Charles content will air eventually!

As for Amy, it’ll be interesting to see what she’s up to. Dorken posted a pic on set, which features her in Amy’s typical scrubs. It sounds like Amy will be buzzing around GH and helping people in need. Of course, there may be a particular case Amy helps out with. Let’s hope Amy will also catch up with a character or two. It’s always nice when Amy gets to talk about something besides medical drama.

We should point out that Maxie Jones’ (Kirsten Storms) relationship is headed for trouble. She doesn’t know it yet, but Peter August (Wes Ramsey) is keeping dark secrets – the kind of secrets their relationship may never recover from. General Hospital fans will recall that Amy’s brother, Chet Driscoll (Chris Van Etten), also expressed interest in Maxie. Could he get another shot at some point?

Maxie will need another love interest and many viewers saw some nice chemistry with Chet. Amy would undoubtedly be all for it! Regardless of what happens down the road, it’ll be fun to see Amy again.

Amy is back! Super grateful to be back shooting in Port Charles! YAHOO! Stay tuned to @GeneralHospital (stream online + local listings if your show gets interrupted!) ❤️🏨 #GH #generalhospital #daytime pic.twitter.com/XkCUfKfyFP