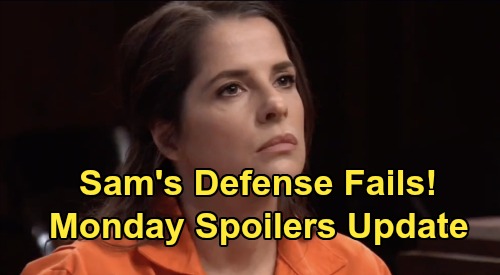 General Hospital (GH) spoilers update for Monday, November 18, teases that “Drew Cain” aka Franco Baldwin (Roger Howarth) will have to hurt Kim Nero (Tamara Braun) deeply. That obviously isn’t what “Drew” wants, but it’s not about what “Drew” wants anymore. He’s reached the conclusion that this life doesn’t belong to him. “Drew” has to give Franco back what’s his, which means he won’t be moving to San Diego with Kim.

Instead, “Drew” will stay behind in Port Charles and apparently submit to the memory procedure. You can bet Kim will try to change “Drew’s” mind, but he’ll be convinced this is what’s best. Franco needs to get back to being Franco, so some big news is headed Elizabeth Baldwin’s (Rebecca Herbst) way eventually.

Of course, Liz is already dealing with the big news of Anna Devane’s (Finola Hughes) return. She got updates from Hayden Barnes (Rebecca Budig), so she’ll talk to Finn about it when they cross paths at GH. Finn will acknowledge that things are awkward at the moment, but he’ll think he can work it all out. He loves Anna as well as Violet Barnes (Jophielle Love), so he has a good reason to sort through all this. Finn will want to co-parent successfully and keep his romance on solid ground, too.

In the meantime, Finn will prove T.J. Ashford’s (Tajh Bellow) theory. T.J. suggested that Alexis Davis (Nancy Lee Grahn) may have ingested rat poisoning, and he’s right about that. It was the “special” ingredient in Kendra Lennon’s (Michelle Argyris) supplement, but Alexis won’t realize that yet. When Finn asks who might’ve poisoned Alexis, she’ll come up with a Kendra-free suspect list.

Neil Byrne (Joe Flanigan) will have a discussion that puts him on the path to the truth later this week. Until then, Alexis will have to ponder the mystery. Finn will do the same during dinner with Anna at home. He’ll bring Anna up to speed and wonder exactly how Alexis ingested rat poison. Talk will eventually turn to Charlotte Cassadine’s (Scarlett Fernandez) rescue and how brave the kid was.

Anna will be glad Charlotte is safe, and she’ll be thrilled to know Cassandra Pierce (Jessica Tuck) won’t be a problem anymore. However, Anna will admit she’d like to know for sure who ordered Cassandra’s death. Finn will assume it was Valentin Cassadine (James Patrick Stuart), so Anna may agree it seems likely. GH fans know it was indeed Valentin who had a bomb planted on that boat.

Other General Hospital spoilers say Diane Miller (Carolyn Hennesy) will do her thing! She’s a skilled attorney and will fight for Sam McCall’s (Kelly Monaco) freedom with everything she’s got. At Sam’s bench trial, Diane will argue this was a clear case of self-defense. Too bad the judge probably won’t agree when the verdict comes in. Sam should face that verdict by the time Tuesday rolls around.

Over with Julian Jerome (William deVry), he’ll be sick and tired of this battle with Olivia Quartermaine (Lisa LoCicero). Julian will get Olivia’s attorney on the phone and insist her client need to be kept under control. If Olivia’s attorney can’t make that happen, Julian will threaten to sue them both.

Despite Julian’s growing anger, it really doesn’t need to be directed at Olivia. The rat situation is Kendra’s fault, so maybe Julian will help Neil put it together. As for Brad Cooper (Parry Shen), he’ll hear about Lucas Jones’ (Ryan Carnes) recent confrontation with Julian. Lucas will insist there’ll be no more interference from Julian. He made certain of that when he disowned Julian in the cemetery!

Brad will dash off to see Julian later and perhaps offer a warning. He might want to make sure Julian will truly stay out of their marriage. This war has been getting nasty though, so Julian may not be ready to give up. General Hospital spoilers say some fantastic scenes are ahead. We’ll keep you posted as other GH details emerge. Stay tuned to the ABC soap and don’t forget to check CDL often for the latest General Hospital spoilers, updates and news.