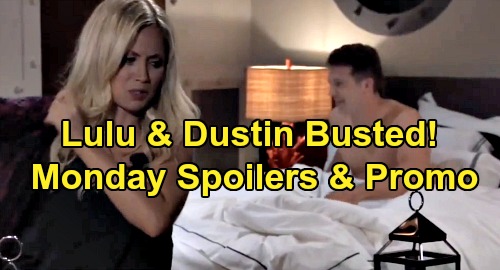 General Hospital (GH) spoilers for Monday, September 16, tease that Franco Baldwin (Roger Howarth) will get some assistance from Harrison Chase (Josh Swickard). He’ll be checking in with Kim Nero (Tamara Braun) at her apartment when Chase drops by to remove Franco’s ankle monitor. Of course, that means Franco will be free to leave town – and Kim plans to leave for Manhattan soon, too.

However, there’ll be some conflicted emotions from Kim as Franco remains in Drew Cain (Billy Miller) mode. He’ll point out that he’s just in love with Kim now as the day he shipped out. Franco will also end up finding a souvenir of their old romance. It might be the CD Drew made for Kim or perhaps something GH fans haven’t seen before.

Either way, it’ll stir up some powerful memories for Franco and further convince Kim that his feelings are genuine. Deep down, Kim knows this isn’t Drew, but he’s really touching her heart. She’ll wind up in bed with Franco, which is a problem since she’ll betray Elizabeth Baldwin (Rebecca Herbst) – who’ll be on her way to Kim’s place!

Will Liz catch Franco and Kim in the act? Time will tell, but Lulu Falconeri (Emme Rylan) and Dustin Phillips (Mark Lawson) certainly just got busted. Laura Webber (Genie Francis) and Curtis Ashford (Donnell Turner) were shocked when they opened a door on The Haunted Star. It turns out Laura was gasping over the sight over her naked daughter and her new lover.

Curtis and Laura will ultimately try to pretend this didn’t happen. What other choice to they have? They’ll excuse themselves and leave Lulu to frantically get dressed along with Dustin. Lulu will wonder how in the world she’s going to explain this to Laura, but the sight alone is pretty self-explanatory.

Julian will make a daring decision on Monday, which may or may not be connected to Liesl. There’s always a chance it could tie in with Kim instead, but a significant choice is looming. In the meantime, Nina Reeves (Cynthia Watros) will try to sell Valentin Cassadine (James Patrick Stuart) on Sasha Gilmore’s (Sofia Mattsson) new job opportunity. She’ll insist it’d be wonderful to have her daughter as the Face of Deception.

Valentin won’t be keen on the idea since it could bring way too much scrutiny and fact-checking. Putting Sasha in the public eye is a terrible idea, which Liesl pointed out. Nevertheless, Nina will hope Sasha takes advantage of this amazing offer and becomes a huge success.

Finally, General Hospital spoilers say Sasha will drop a bomb on Michael Corinthos (Chad Duell). She’ll admit she’s not Nina’s daughter before spilling the whole wild story. Michael will reel as he processes this shocker, so he’ll have a lot to mull over before he decides his next move.

It sounds like another action-packed episode’s coming up. We’ll give you updates as other GH news emerges. Stay tuned to the ABC soap and don’t forget to check CDL often for the latest General Hospital spoilers, updates and news.