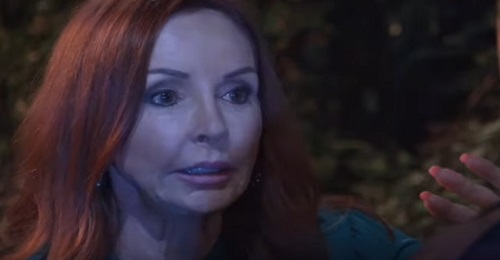 General Hospital (GH) spoilers update for Monday, September 23, teases that Bobbie Spencer (Jacklyn Zeman) will yell for help on side of the road. Shiloh Archer (Coby Ryan McLaughlin) just stopped Bobbie’s car, so he’ll force her out of it soon enough. The fugitive will swipe his new wheels and perhaps kidnap his fake son in the process.

There’s a possibility that “Wiley Cooper-Jones” was with Bobbie when Shiloh blocked her journey. Whatever the case, it appears Shiloh will indeed wind up going on the run with “Wiley.” Sam McCall (Kelly Monaco) will head to The Haunted Star on a desperate mission, so she may expect Shiloh to land there eventually.

Over with Carly Corinthos (Laura Wright), she’ll reflect on her baby’s condition and worry about what the future holds. Carly can’t change her unborn child’s spina bifida diagnosis or predict how severe it’ll be. All she can do is lean on Sonny Corinthos (Maurice Benard) for support and hope they can be the parents this kid needs.

In the meantime, Carly’s teenage daughter will seemingly get confused. Josslyn Jacks (Eden McCoy) will assume that boarding school pamphlet was an attempt to send her away. She’ll spill the beans to Jasper “Jax” Jacks (Ingo Rademacher) on Monday, so he’ll make a beeline for Sonny and Carly. Jax will wonder if Josslyn’s right and question what in the world’s going on.

However, the brochure was actually for Dev Cerci (Ashton Arbab) and nothing’s been decided yet. Unfortunately, Dev feels like a nuisance and is already looking into Montreal flights. Someone had better stop Dev before he does something risky!

Other General Hospital spoilers say Julian Jerome (William deVry) will demand some answers. He’ll pick up on the clues and wonder exactly what went down in Kim Nero’s (Tamara Braun) apartment. After Kim confesses that she hooked up with Franco Baldwin (Roger Howarth), Julian’s heart will shatter. He’ll sense that there’s just no hope for their romance, so he’ll stomp off to lick his wounds.

Next, Franco will encourage Elizabeth Baldwin (Rebecca Herbst) to wrap her head around the situation. He doesn’t remember being Franco at all and doesn’t want Liz in his life. Franco will insist Kim’s who he belongs with and urge Liz to accept it. He’ll want his release from the facility Liz stashed him in, but it doesn’t look like she’ll grant it anytime soon.

Over with Hamilton Finn (Michael Easton), he’ll grill Peter August (Wes Ramsey) about something in Monday’s GH episode. Peter may dodge certain questions artfully and offer vague answers to others. General Hospital spoilers say Peter will continue to play the part of a good guy, but there’s definitely a baddie lurking underneath.

It sounds like the excitement’s revving up in Port Charles. We’ll give you updates as other GH news comes in. Stay tuned to the ABC soap and don’t forget to check CDL often for the latest General Hospital spoilers, updates and news.