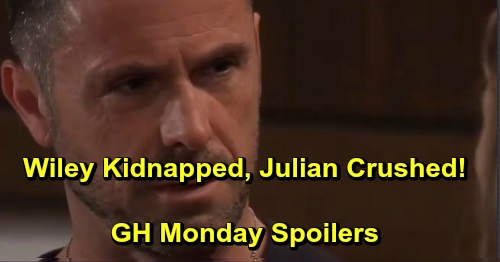 General Hospital (GH) spoilers for Monday, September 23, tease that Hamilton Finn (Michael Easton) will have an interesting chat with Peter August (Wes Ramsey). He’ll have some questions for Peter, but he’ll probably just get lies and half-truths in return. Peter’s definitely in deception mode right now, so he’ll certainly cover up his shady activities if need be.

Meanwhile, Franco Baldwin (Roger Howarth) will be frustrated with Elizabeth Baldwin (Rebecca Herbst). He was sedated and hauled away by some orderlies recently, but he’ll push Liz to sign off on his release. Franco will insist he belongs with Kim Nero (Tamara Braun) and urge Liz to accept she has no claim on him.

However, Liz may remind Franco of all the promises they made to each other. Maybe Franco doesn’t remember making those promises, but he still made them. Liz just won’t be willing to give up on their future together. Over with Kim, she’ll be on the hot seat with Julian Jerome (William deVry). He’ll wonder what exactly happened last night, so Kim will decide to admit everything.

General Hospital spoilers say Julian will be crushed over the news that Kim slept with Franco. He’ll realize it’s time to throw in the towel on this relationship, so he’ll ultimately walk out on Kim. Julian has tried to be patient, but enough is enough. It’s clear that their love isn’t what he thought it was.

Nevertheless, Joss will think her mom and Sonny are trying to ship her off, so Jax will vow to handle it. He’ll confront Sonny and Carly later, so they’ll have to assure both Jax and Josslyn that she’s not going anywhere. Of course, Josslyn won’t want Dev to be sent away either, so that should lead to another debate entirely. As for Dev, he’s already contemplating his own preemptive trip to Montreal.

In the meantime, GH spoilers say Carly will continue to fret over her baby. She’ll tell Sonny her condition hasn’t changed, so they need to be realistic about certain things. Sonny will undoubtedly insist they can handle whatever’s in store. He’s just focused on preparing a home full of love. Sonny and Carly intend to give their child the best life possible, even if there are difficulties along the way.

Other General Hospital spoilers say Bobbie Spencer (Jacklyn Zeman) will find herself stranded on the side of the road. Shiloh Archer (Coby Ryan McLaughlin) just escaped and stopped Bobbie’s car, so he’ll steal it on Monday. The worst part is “Wiley Cooper-Jones” may be inside! Bobbie mentioned going to see “Wiley,” so there’s a good chance he’s right there in the backseat.

It sounds like “Wiley’s” fake baby daddy will manage to kidnap him, so the action’s really heating up. As for Sam McCall (Kelly Monaco), she’ll receive updates that send her racing to The Haunted Star. GH fans won’t want to miss Monday’s shocking episode. We’ll keep you posted as other details emerge. Stick with the ABC soap and don’t forget to check CDL often for the latest General Hospital spoilers, update and news.