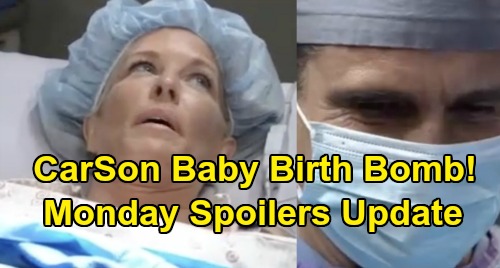 General Hospital (GH) spoilers update for Monday, September 30, teases that Willow Tait (Katelyn MacMullen) will head to Pentonville and pay a visit to Harmony Miller (Inga Cadranel). She’ll reveal that Shiloh Archer (Coby Ryan McLaughlin) is dead, so that should be music to her mother’s ears. Harmony now views the man she once adored as a monster. She should be pleased to know Shiloh will no longer be a threat to Willow, “Wiley Cooper-Jones” or anyone else he might’ve targeted.

It looks like Nelle Benson (Chloe Lanier) may meet with Willow next. She’ll tell someone it’s so good to finally meet face to face, so Willow makes sense here. Nelle has heard all about Willow from Harmony and would have a motive to mess with her. Willow still thinks she’s “Wiley’s” birth mother, so Nelle could pump her for info and perhaps taunt her with a veiled hint about Jonah Corinthos.

At GH, Michael Corinthos (Chad Duell) will focus on supporting his family. He’ll be on hand as Carly Corinthos (Laura Wright) gets ready for her C-section. Michael will catch up with Josslyn Jacks (Eden McCoy) as they await updates on Monday. Joss will mention running into someone surprising – and it turns out it’ll be Nelle, who’s been part of a gardening project in the park.

While Michael hears about Josslyn’s tense encounter, Kristina Corinthos-Davis (Lexi Ainsworth) will have an encounter of her own. General Hospital spoilers say Kristina will spot Alexis Davis (Nancy Lee Grahn) after a workout and she’ll have someone with her. It seems likely it’ll be Kendra Lennon (Michelle Argyris), the personal trainer who clearly wants revenge on Alexis.

Kendra appears to have Kiefer Bauer (Christian Alexander) ties, and she was mixed up with Shiloh, too. He’s the one who tipped Kendra off and sparked her latest mission for vengeance. Kristina will suggest the person with Alexis seems familiar, so maybe she saw Kendra at the DoD house. There’s also a chance Kristina met Kendra due to her connection to Kiefer and can’t quite recall it.

Kristina could’ve even seen a photo of Kendra at one time. There are plenty of paths to familiarity, but it adds up to danger any way you slice it. Back at GH, Sonny will support Carly as they prepare to meet their baby. General Hospital spoilers say Sonny will be brave for Carly’s sake, but he’ll be scared deep down. Once Sonny gets a moment alone, we’ll definitely see his fears on display.

Finally, Sam McCall (Kelly Monaco) will answer more questions involving Shiloh’s death. The eavesdropping nurse showed up to tattle on Sam, so Jordan Ashford (Briana Nicole Henry) will suspect there was more to the story. She’ll end up arresting Sam for Shiloh’s murder eventually, so Jason Morgan (Steve Burton) should be furious.