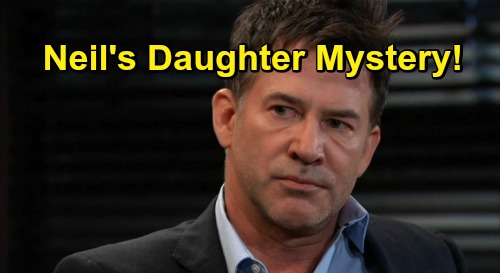 General Hospital (GH) spoilers reveal that there’s a big mystery on many fans’ minds and Neil Byrne (Joe Flanigan) is at the heart of it. GH is finally starting to give us a glimpse of Neil’s backstory, but it’s only brought more questions and confusion. Most viewers have been left wondering where in the world General Hospital writers are going with this.

The most baffling part is the fact that GH set up so many potential connections that can seemingly be disproven. That doesn’t mean they won’t find some crazy workaround, but we still have to look at what the show’s given us so far. From the get-go, many people figured Neil would turn out to be Willow’s adoptive father. He’s an expert on cults and mentioned being able to relate to a patient’s situation.

Of course, Neil was talking about Alexis Davis (Nancy Lee Grahn) and everything she’s been going through with Kristina Corinthos-Davis (Lexi Ainworth). However, the Willow Tait (Katelyn MacMullen) is Neil’s daughter theory was blown when Neil came face to face with her at Kristina’s intervention. There wasn’t even a hint of recognition between them.

Some fans thought GH might head in the direction of plastic surgery, but recent information disproves that theory, too. We know Willow found her dad after his overdose, which was the morning following her initiation. Based on the timing of Wiley Cooper-Jones’ conception, this wasn’t that long ago.

Kevin Collins (Jon Lindstrom) mentioned that he hadn’t seen Neil in seven years, but he clearly still recognizes him. That shuts down any ideas of facial reconstruction. Neil’s face is Neil’s face and has been for quite some time.

There’s also the death notice to consider. Neil’s daughter, Joanna Byrne, died on July 21, 2014. None of this is adding up to Willow and Neil having any sort of connection at all.

At the same time, General Hospital keeps playing the stories alongside each other in episodes. Are they just trying to create some parallels or is there some twist no one is seeing yet? Time will tell, but it really doesn’t look like Neil is linked to Willow at this point. Her father seems genuinely dead, but what about Neil’s daughter? Maybe that’s the answer to where this muddled storyline is actually going.

What if Neil’s daughter was the one whose death was faked? If so, does Neil know or could that come as a surprise? Willow was Kali Miller before she changed her name and everybody at DoD remembers her bolting. She can’t be the daughter who’s possibly still out there, but someone else could be.

Some viewers have suggested Sasha Gilmore (Sofia Mattsson) as an option, but what she’s revealed about her past doesn’t seem to line up. She was also a few tables over from Neil at the Nurses Ball, so it’s doubtful he missed her. Could GH kick off a search for Neil’s daughter instead? That might be something interesting for Alexis and Neil to team up on.