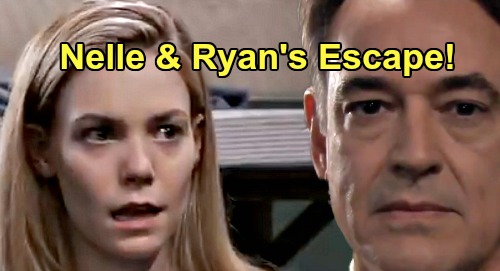 General Hospital (GH) spoilers tease that something’s brewing at Pentonville. As GH viewers know, the prison currently houses three people whose lives may be soon becoming very entwined. Ryan Chamberlain (Jon Lindstrom) is incarcerated there for his numerous crimes, and he’s recently befriended Nelle Benson (Chloe Lanier), who is jailed there as well.

There’s been quite a bit of fan buzz about the quick friendship that launched between Nelle and Ryan. These two think they’re kindred spirits in a way, since they each feel that a kidney was stolen from them, and ever since their initial meeting in the Pentonville infirmary, GH fans have been wondering what’s in store for these two.

Of course, since neither Nelle nor Ryan really have a shot at ever being released from custody, there’s been quite a bit of General Hospital buzz that the two will try to escape from prison together. That would be quite the turn of events, but we think that if any duo could pull it off, these two could. After all, each is pretty cunning and when it comes to them, anything’s possible.

Ryan certainly has motive for wanting to escape – General Hospital spoilers say he desperately wants revenge on the individuals who stole his kidney without his consent. He’d like nothing more than to take out Curtis Ashford (Donnell Turner) and Jordan Ashford (Briana Nicole Henry), as well as the others involved in the plot to forge his consent on the transplant paperwork. Plus, he’d love to catch up with his love, Ava Jerome (Maura West).

And Nelle would of course welcome the opportunity to get out and further harass Michael, which she loves to do. But there may be another motive for her to escape, and it has everything to do with her son, Jonah Corinthos, whom everyone believes is Wiley Cooper-Jones.

Brad Cooper (Parry Shen) recency visited with Nelle in prison and filled her in on the difficulties he was facing now that Wiley’s birth parents are in the picture. While Willow Tait (Katelyn MacMullen) seems to be content to let “Wiley” stay with Brad and Lucas Jones (Ryan Carnes), the birth father Shiloh Archer (Coby Ryan McLaughlin) is not, and he has been seeking DNA evidence that he’s Wiley’s father.

Of course, Brad knows that if a DNA test is ever run, he’s toast, and the secret about Wiley not being Wiley will come out. If Shiloh ends up getting close to that point, Brad will probably run back to Nelle and seek her help. And if that happens, Nelle may very well want to bust of prison and go after her son, to reclaim him and protect him from Shiloh.

But there may be a wrinkle for Nelle and Ryan, assuming they do try to escape from Pentonville, and that’s Lorraine “Harmony” Miller (Inga Cadranel), who’s now Nelle’s roommate. Like most people, Harmony’s under the belief that she’s “Wiley’s” grandmother, and if Nelle decides to confide in her about a escape attempt and the reason for her escape, Harmony could end up putting two and two together and worry that Nelle’s after her grandson.

Of course, if Harmony hears about Nelle’s baby saga, things could go one of two ways…she could keep her mouth shut and end up tipping someone off as to what Nelle and Ryan have planned on the outside, or she could end up confronting Nelle and putting herself in serious physical danger.

GH viewers will have to wait to see what actually happens with Nelle, Ryan, and Harmony, but it seems that we’re in for an exciting ride no matter what! Do you think Nelle and Ryan will try to escape from prison together? Stay tuned to the ABC soap and don’t forget to check CDL often for the latest General Hospital spoilers, updates, and news.