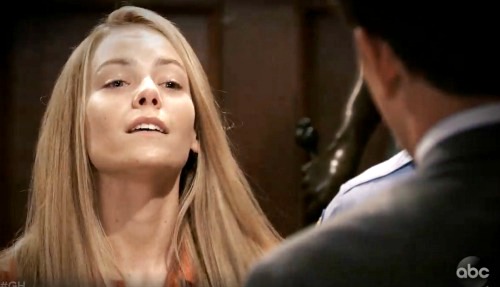 General Hospital (GH) spoilers reveal that Chloe Lanier (Nelle Benson) was recently back at the studio for a special task. She participated in an interview with the other GH Daytime Emmy nominees, which was posted as a Facebook live chat. Lanier also spent some time hanging out in Eden McCoy’s (Josslyn Jacks) dressing room, so she was making herself at home again around General Hospital.

There’s no word on another possible Nelle stint yet, but many GH fans are hopeful. Lanier added to that hope with an Instagram post, which she put up after her stylist finished with her hair. “She’s back,” Lanier said. Brytni Sarpy (ex-Valerie Spencer) praised Lanier’s great caption and McCoy replied that “she never left.”

Of course, Lanier may just mean she feels like herself again after sprucing up her look. The Daytime Emmys are coming up after all! Even so, General Hospital spoilers say there are some fantastic Nelle story opportunities coming up. Lanier has been open about her desire to keep appearing as Nelle, so we can undoubtedly expect her back sooner or later.

At the time of her departure, Lanier assured fans that she loved the role and working at GH. It had just become too time consuming, so Lanier opted not to re-sign her contract. She wanted to branch out with some new projects, but she made it clear that she’d pop in if her schedule allowed.

Since General Hospital set up this huge baby swap storyline with Nelle right in the middle, they probably went ahead and worked out a few things with her in advance. There must be an understanding that Lanier will appear when they need her for major plot points – especially after the big reveal later. This is critical to the success of the story, so Lanier wouldn’t want to let fans down either.

Even many Nelle haters embraced the character once General Hospital made her truly crazy. Lanier plays Nelle’s unhinged, manipulative side so well. It was wise for GH to lean into that and ditch Nelle’s softer side altogether. Nelle’s craziness should be on full display whenever she makes her next appearance.

That may not be too far off since Michael Corinthos (Chad Duell) is already taking steps toward the truth. Nelle’s returns are sometimes thrown in instead of officially announced, which tends to bring some fun surprises for viewers. Will Michael get a new clue before long? Could Nelle’s comeback be just around the corner?