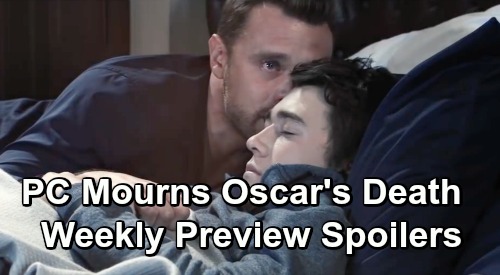 General Hospital (GH) spoilers tease that Oscar Nero Quartermaine’s (Garren Stitt) death brings unbelievable sadness and grief for the people who loved him. The new General Hospital weekly preview promo (May 2-3) shows the aftermath of Oscar’s death, as his loved ones deal with their grief and say their final goodbyes.

As GH viewers know, Oscar passed away on Wednesday’s episode, with Lila Quartermaine (Anna Lee) and Edward Quartermaine (John Ingle) coming to welcome Oscar to the afterlife. Oscar initially resisted going with his great-grandparents, and he envisioned a situation in which he was suddenly cured of his brain cancer.

Viewers were treated to some touching scenes of what might have been, had Oscar been able to beat the cancer. But Oscar’s vision soon started changing into visions of a future without him, with his mother getting engaged to Julian Jerome (William deVry), Sonny Corinthos (Maurice Benard) and Carly Corinthos (Laura Wright) having their baby, and Josslyn Jacks (Eden McCoy) moving on with another boyfriend.

Ultimately, Oscar quietly passed away, after his spirit rose to kiss Josslyn goodbye before joining a welcoming Lila and Edward. As the moment occurred, Kim Nero (Tamara Braun) felt a jolt of electricity, along with a sense of knowing that her son had passed.

The new GH promo begins with Kim checking on Oscar, with Drew Cain (Billy Miller) and Josslyn looking on anxiously. Drew simply says, “He’s gone,” as Kim cradles Oscar in her arms and cries. Soon, Monica Quartermaine (Leslie Charleson) walks in, to see Drew and Kim with Oscar’s lifeless body, and she instantly knows that Oscar is gone.

Both Kim and Oscar will say their own goodbyes to their son, as Kim tells Oscar that she loves him and that “I don’t know how to do this without you.” Drew is also shown telling Oscar that “You’re going to be in my heart for the rest of my life.”

Kim is also shown in the promo getting comfort from Julian, as she cries and tries to process what’s happened and how she’ll go forward with her life. The promo also shows a wall of photographs and handwritten memory notes, clearly a memorial to Oscar probably created by Josslyn, Cameron Webber (William Lipton), and his friends from school.

Finally, the promo shows Josslyn saying her final goodbyes to Oscar. A devastated Josslyn tells Oscar that “I’m going to love you forever,” as she cries. Josslyn has remained so strong throughout this whole ordeal, but look for her to break down afterwards and reach out to Jasper ‘Jax’ Jacks (Ingo Rademacher) for some extra support.

It certainly looks like viewers will need to keep tissues handy throughout the remainder of the week, as everyone says their final goodbyes to a beloved character. Stay tuned to the ABC soap and don’t forget to check CDL often for the latest General Hospital spoilers, updates, and news.