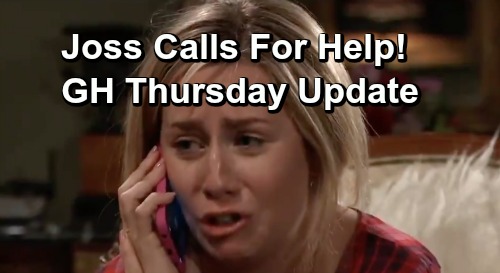 General Hospital (GH) spoilers update for Thursday, May 2, tease that Oscar Nero’s (Garren Stitt) death will hit his loved ones hard. For starters, Josslyn Jacks (Eden McCoy) will need more support. She’ll get on the phone and beg someone to come see her, so it seems Jasper “Jax” Jacks (Ingo Rademacher) will be the one who hears her plea. He’s headed back to Port Charles starting May 7.

While Joss waits on her dad, Dr. Kim Nero (Tamara Braun) will grieve for her son. She’ll sob as Drew Cain (Billy Miller) encourages her to be strong. Kim won’t know how she’s supposed to let go, but Drew will help her as best he can. They’re in this together, so at least Kim will have someone who understands going through this with her.

Over with Carly Corinthos (Laura Wright), she’ll get in touch with Elizabeth Baldwin (Rebecca Herbst). Carly will be grateful to Liz, so Liz will probably express gratitude, too. This may be about their kids being there for each other. Josslyn and Cameron Webber (William Lipton) both care about Oscar, so their moms will be glad they can come together in mourning.

Speaking of Cameron, he’ll manage to patch things up with Franco Baldwin (Roger Howarth) on Thursday. After Franco forces Cam to listen, they’ll reach an understanding and try to move forward. Oscar’s demise may help them see that every moment matters. The “Friz” family needs less drama, so Franco and Cameron’s truce will help with that.

Other General Hospital spoilers say Sam McCall (Kelly Monaco) will battle distractions. If she hears the news about Oscar, Sam might struggle to get Drew off her mind. She should realize how difficult this must be for her ex. Nevertheless, the Shiloh Archer (Coby Ryan McLaughlin) show must go on. Sam will tell Jason Morgan (Steve Burton) about the file Shiloh has on her and plot the next step in her charade.

GH fans will also see a confrontation between Shiloh and Willow Tait (Katelyn MacMullen). After Shiloh drops by the school unexpectedly, Willow will naturally freak out. She’ll freak out even more once Shiloh admits he talked to her mother, Harmony Miller (Inga Cadranel). Shiloh will suggest that they don’t keep secrets, so that’ll leave Willow wondering how much her mom really spilled.

Harmony claimed she never told Shiloh about Willow’s pregnancy, and that seems to be true. Of course, Willow could still fear that Harmony lied. She might even get tripped up by Shiloh’s mind games and inadvertently say too much. Whatever the case, Willow will be a nervous wreck as she faces off with her former leader.

Across town, General Hospital spoilers state that Michael Corinthos (Chad Duell) will deal with a pest. Harrison Chase (Josh Swickard) can’t rest until he has some answers regarding Kristina Corinthos-Davis (Lexi Ainsworth) whereabouts. He’ll keep interrogating Michael, but it looks like he’ll get nowhere.

Chase will contend that if Kristina’s family isn’t responsible, she could still be at risk. He may just be trying another tactic, but Michael probably won’t take the bait. There’s a lot riding on Kristina’s exit therapy, which has to continue or else they could lose her forever.