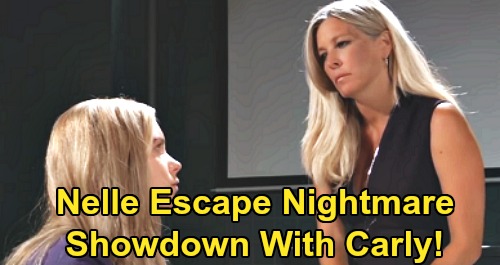 General Hospital (GH) spoilers reveal that any remaining Shiloh Archer (Coby Ryan McLaughlin) worries may evaporate for Nelle Benson (Chloe Lanier). Shiloh was already facing some serious charges, but he’ll be adding more thanks to this hostage situation with Sam McCall (Kelly Monaco). That is, of course, if Shiloh even survives long enough to be punished.

Many GH fans seem to be rooting for death here. Killing Shiloh off would be the most fitting end after all the rotten things he’s done. Viewers certainly won’t be clamoring for Shiloh’s return anytime soon – if ever! Perhaps General Hospital should just let someone take Shiloh out and be done with it.

That’d bring an interesting development in the baby swap story. Nelle nearly came clean to Michael Corinthos (Chad Duell) due to her Shiloh fears. She ultimately backed out, but Nelle’s concerns may linger for a while. If Shiloh ends up dead or even just lands in prison, Nelle can potentially relax about that. However, her attention may have to shift to a more infuriating threat.

Still A Chance Ryan Chamberlain Will Join In Her Escape Plot

They made a deal to keep their secrets under wraps, but suspicious Carly was watching. Since Carly’s nosy and in need of a distraction from her own baby drama, things may not go well for Brad in the coming weeks.

As a result, things may not go well for Nelle either! Maybe GH will give Nelle another reason to escape as the truth starts to unravel. Previous General Hospital spoilers pointed to Nelle’s jailbreak, which obviously still hasn’t happened yet.  Nevertheless, it still seems to be cooking. There’s a good chance Ryan Chamberlain (Jon Lindstrom) will ultimately join in Nelle’s getaway plot.

Nelle Benson’s Escape May Be About Protecting Her Own Agenda

If Carly gets too close to the truth, will Brad visit in a panic? Will he warn Nelle that everything’s about to blow up in their faces? Even if Nelle gets the news another way, she’s bound to find out as this hot plot explodes. Just before Carly potentially spills the beans, Nelle may take action and swipe Jonah Corinthos before Michael can claim him.

In other words, Nelle’s escape may be less about protecting Jonah and more about protecting her own agenda. The whole point of Nelle’s plan was to make sure the Corinthos clan suffered and never got their hands on Jonah. You can bet Nelle will do whatever she has to do to prevent Carly from destroying her scheme.