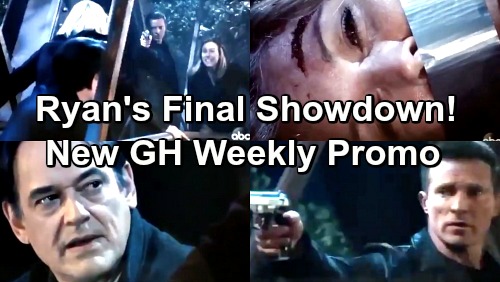 General Hospital (GH) spoilers tease that some shocking moments are ahead on the ABC soap. The serial killer storyline will deliver some of its biggest twists yet! A new GH promo for March 5 to March 8 reveals some crazy bombshells that’ll bring several characters into the Ryan Chamberlain (Jon Lindstrom) drama. For starters, let’s talk about Carly Corinthos’ (Laura Wright) current predicament.

Ryan just restrained Carly, put tape over her mouth and stashed her in the trunk of his car. Now he’s on his way to Niagara Falls to elope with Ava Jerome (Maura West). General Hospital spoilers say Jason Morgan (Steve Burton) will gather some clues and head to the same location. He’ll ultimately team up with Laura Webber (Genie Francis) and hope they’re not too late to prevent another murder!

Of course, the teens will also be involved in this chaos. Oscar Nero (Garren Stitt), Josslyn Jacks (Eden McCoy), Cameron Webber (William Lipton) and Trina (Sydney Mikayla) will be stranded thanks to some car trouble. They’ll be stuck in the same area that Ryan and Ava are set to visit. That could certainly leave Oscar and the gang in major trouble!

General Hospital’s preview video shows Jason bursting in what appears to be the teens’ motel room or cabin. He’ll point his gun in usual “Stone Cold” mode. Will Josslyn and the others have a run-in with Ryan? Could Trina or perhaps Oscar be severely injured? Even just the stress of the situation could be enough to spark a seizure for Oscar and leave him in bad shape.

Regardless, Jason will have other GH characters to save. Back with Ava, she’ll be stunned when she opens the trunk and finds Carly. Ava will wonder what in the world is going on. It won’t be long until there’s a serious showdown on a bridge. Jason and Laura will finally catch up to Ryan, who’ll be trying to convince Ava that they can still have a future together.

As Jason aims his weapon, Laura will shout, “It’s not Kevin! It’s Ryan Chamberlain!” She may add that Ryan’s the persona who’s been wreaking deadly havoc all over Port Charles. Soon after, Ryan will pull Ava into one last kiss and hurl her over the side of the bridge.

The promo cuts away too fast to tell if this is just another murder attempt or perhaps a murder-suicide. There’s a chance Ryan may realize the jig is up and opt to go down with his love. If so, maybe Ava could hold Ryan’s head under the water’s surface and finish him off!

Then again, Jason could save Ava and they could intentionally leave Ryan without help. Regardless, Ava will undoubtedly make it out of this wet jam alive! We’ll give you updates as other GH news comes in. Stay tuned to the ABC soap and don’t forget to check CDL often for the latest General Hospital spoilers, updates and news.