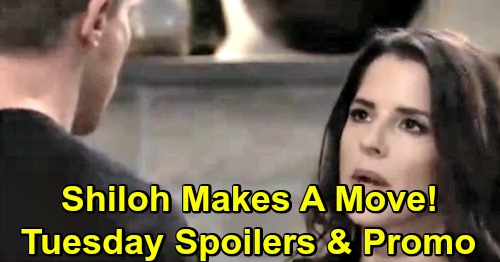 General Hospital (GH) spoilers for Tuesday, March 5, tease that Shiloh Archer (Coby Ryan McLaughlin) will make Kristina Corinthos-Davis’ (Lexi Ainsworth) heart flutter. She hasn’t admitted she has feelings for him, but it’s obvious based on her jealousy over Shiloh’s bond with Sam McCall (Kelly Monaco). Kristina will finally get Shiloh’s full attention soon, so she’ll enjoy every minute of it.

Shiloh will assure Kristina that she’s a gift to Dawn of Day – and a gift to him personally. Kristina may wonder if this could become more than just a mentor-follower relationship. She certainly doesn’t seem opposed to the idea. Of course, Shiloh is bad news and that should become apparent to Kristina down the road. She doesn’t know what she’s getting herself into!

As for Sam, she’ll question her decision to dupe Shiloh. Jason Morgan (Steve Burton) and Sam have had some close calls, so this is getting risky and stressful. Sam will think maybe it’s time to just bail on the whole thing, but Jason may convince her to stick with it. Shiloh is a real threat, so they have to stay the course and get Kristina away from him.

Meanwhile, GH’s teen scene will end up in a jam. They took a trip to Niagara Falls, but some car trouble will leave them stranded. Oscar Nero (Garren Stitt) will tell Josslyn Jacks (Eden McCoy), Cameron Webber (William Lipton) and Trina (Sydney Mikayla) what they’re up against on Tuesday. His car won’t be fixed until the next day, so it looks like they’ll have to book a motel room.

Other General Hospital spoilers say Epiphany Johnson (Sonya Eddy) will talk to an unconscious Franco Baldwin (Roger Howarth). At GH, she’ll ask if he can hear her, but he may or may not wake up just yet. Regardless, Harrison Chase (Josh Swickard) will have some updates for Elizabeth Webber (Rebecca Herbst). She’ll be stunned to learn Franco may have been telling the truth about Ryan Chamberlain (Jon Lindstrom).

Chase will inform Liz that Ryan could still be alive, so she’ll reel over this new info. Liz will also fret over Franco’s condition, but she’ll try to stay strong and hope for the best. Back with Jason, he’ll find Carly Corinthos’ (Laura Wright) cell phone in the parking garage. Jason will realize Carly must’ve dropped it, but he’ll have to wonder if this was really just a simple mistake.

It won’t take long for Jason to sense danger and start trying to find some answers. At Ferncliff, Laura Webber (Genie Francis) will tell Dr. Kevin Collins (Jon Lindstrom) that they have to get out and report Ryan to the police. They just found a secret tunnel, so Laura will think they have every reason to be hopeful.

However, Kevin will insist he’s not going with Laura. He’s currently blind, so he would just slow her down. General Hospital spoilers say Laura will reluctantly leave Kevin behind, but she’ll vow to get help for him as soon as possible.

Laura will get caught up in some crazy situations before the week’s over, so don’t miss all the action. We’ll keep you posted as other GH details emerge. Stay tuned to the ABC soap and don’t forget to check CDL often for the latest General Hospital spoilers, updates and news.