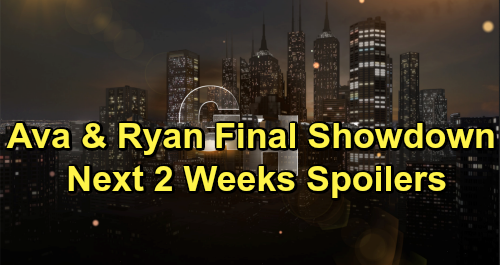 General Hospital (GH) spoilers for next 2 weeks tease that some stunning moments are ahead. During the week of March 4-8, Jason Morgan (Steve Burton) will make a troubling discovery. He’ll find Carly Corinthos’ (Laura Wright) cell phone in the GH parking lot, but Carly won’t be anywhere in sight.

Jason will feel like there may have been a struggle that resulted in this dropped device. He’ll worry about what might’ve happened to Carly, but General Hospital fans know she just found Ryan Chamberlain (Jon Lindstrom) with his incriminating box of licenses. Carly will be kidnapped thanks to what she knows, so she’ll end up in the trunk as a reluctant part of Ryan’s elopement plans.

After Ava Jerome (Maura West) fills Julian Jerome (William deVry) in on her plans, she’ll dash off to marry Ryan in Niagara Falls. She just won’t realize Carly’s along for the ride! Back with Jason, he’ll run into the real Dr. Kevin Collins (Jon Lindstrom). Kevin will finally have his freedom by then, so he’ll explain the swap to Jason and note that Ryan is determined to make Ava his wife.

General Hospital spoilers say Jason will process that info and head straight to Charlie’s Pub. He’ll give Julian updates on what he knows and hope to learn where Ava was going. Julian will likely recall Ava mentioning Niagara Falls, so Jason may determine Carly’s headed there, too.

During the week of March 11-15, Josslyn Jacks (Eden McCoy) will blame herself for the drama of the Niagara Falls trip. It looks like some sort of accident will occur – most likely one that ties in with Ryan somehow. Joss will hate that she funded and pushed for this adventure, especially since Oscar Nero’s (Garren Stitt) life could be in imminent danger.

Cameron Webber (William Lipton) will also face backlash for driving his friends on this road trip. Elizabeth Webber (Rebecca Herbst) won’t be pleased, but she’ll also have Franco to worry about. He’ll pull through after that horrific stabbing, but devastation will strike later. Liz may suggest she needs time before they can work through this. She may even push for an annulment until she figures things out.

Meanwhile, General Hospital spoilers say Dr. Kim (Tamara Braun) will battle growing fears. She may worry that Oscar’s already running out of time. She’ll turn down help from Shiloh Archer (Coby Ryan McLaughlin) later as Michael Corinthos (Chad Duell) gets caught in some conflict. Perhaps that’ll have something to do with Willow Tait (Katelyn MacMullen), who will spar with Brad Cooper (Parry Shen).

Brad had better be more careful if he wants to keep his baby swap secret under wraps. Getting on Willow’s bad side isn’t going to help! Finally, Ava will realize she’s engaged to the enemy. An epic Ryan and Ava showdown is brewing, so we’ll keep you posted as other GH news comes in. Stick with the ABC soap and don’t forget to check CDL often for the latest General Hospital spoilers, updates and news.