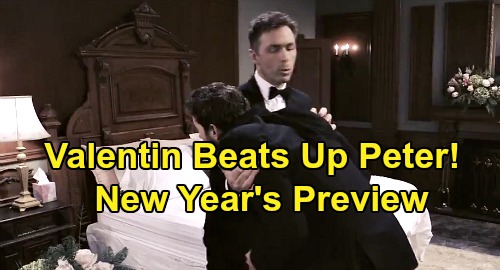 General Hospital (GH) spoilers tease that we’re in for some exciting times as the New Year approaches. The new GH preview promo for 2020 is called New Year, New Drama, and it promises a lot, so let’s get right into it. First off, Sonny Corinthos (Maurice Benard) is shown venting his frustrations to Jason Morgan (Steve Burton). He says angrily, “I don’t let things happen – I act!” as Jason listens intently. He’s likely referring to the situation unfolding with his wife Carly Corinthos (Laura Wright) and Jasper “Jax” Jacks (Ingo Rademacher).

As GH viewers know, Sonny is aware that Carly is keeping some bombshell secret for Jax, and that the secret is dangerous and could come back to bite Carly. Of course, Sonny has no idea that the secret is that Nikolas Cassadine (Marcus Coloma) is alive and lurking around Port Charles. But Sonny’s determined to get to the bottom of the matter, and on a previous episode, GH viewers saw that Sonny called an associate and asked for his help regarding the situation.

It’s quite possible that Jason and Sonny are arguing in the promo about how to best handle the Carly/Jax situation. It would make sense that Sonny is defending his actions, saying that he takes action when problems arise. We’ll see if Sonny gets to the bottom of what the big secret is before Nikolas’ existence comes out – or maybe Jason will.

Well, speaking of Carly and Jax, they’re shown in the promo as well, with Carly asking Jax what his plan is now. GH viewers will remember that Jax told Nikolas that he would only keep his existence a secret until New Year’s Eve, so Jax must have some intentions for what he’s going to as the New Year approaches. We’ll see if he fills Carly in.

The promo then appears to show some New Year festivities taking place at Wyndemere, as various characters are shown in party attire in and around the castle. For one, Valentin Cassadine (James Patrick Stuart) and Ava Jerome (Maura West) are shown outside of the castle, with Ava stumbling a bit and Valentin catching her and ominously telling her that she’s not going anywhere, as she looks at him menacingly.

Of course, Valentin is probably wondering what Ava knows about Helena Cassadine’s (Constance Towers) portrait and the codicil that allegedly burned up with the painting. It probably won’t take Valentin long to figure out that Ava still has the codicil, which would put his fortune and livelihood at risk. It’s no wonder that he’s so gruff with Ava.

Curiously, Valentin is also shown getting physical with Peter August (Wes Ramsey) at Wyndemere. The promo moves pretty fast, but it appears to show Valentin kneeing Peter in the abdomen in a bedroom in the castle. What could this be about? Perhaps Peter will be feeling guilty about all his misdeeds and will want to talk to Valentin, which will turn into a disagreement.

There are other quick flashes of scenes in the promo that suggest some major happenings on the show as well. First, Josslyn Jacks (Eden McCoy) is shown tenderly holding Dev Cerci’s (Ashton Arbab) face and moving in for a kiss. That’s a major development on the teen scene and will surely cause some drama when Jax and Carly find out that the teens are attracted to each other. We might see Joss moving into Jax’s house pronto!

On the baby swap front, there are some hints from the promo that we could finally see some movement here. Interestingly, Lucas is shown laying in his hospital bed, but back on a ventilator, so he might suffer a downturn. And there are quick flashes to stills of Wiley Cooper-Jones (Theo and Erik Olson), Alexis Davis (Nancy Lee Grahn), and Michael Corinthos (Chad Duell). Could we be getting closer to a big reveal about Wiley really being Jonah Corinthos?

Finally, in the ending montage in the promo, a major reveal is made. Lulu Spencer (Emme Rylan) is shown standing in front of Nikolas, then turning around quickly in surprise. Flashes of Brook Lynn Ashton (Amanda Setton) and Liesl Obrecht (Kathleen Gati) are shown, then Laura Collins (Genie Francis) is shown looking shocked and surprised, with Nina Reeves (Cynthia Watros) and Martin Grey (Michael E. Knight) standing behind her.

Could this be the moment that Laura finally sees Nikolas and realizes that her son is alive? Surely, if Lulu saw Nikolas, then Laura will see him as well, so it looks like we’ve got a major New Year’s reveal to look forward to! But who will have revealed Nikolas? GH viewers will have to tune in to see how it all plays out.