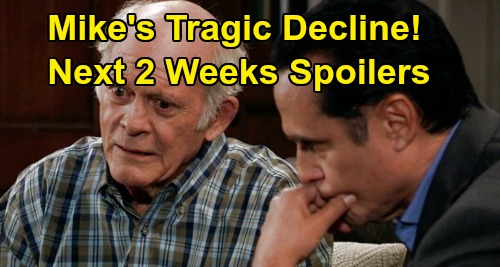 General Hospital (GH) spoilers next two weeks tease that some heated conflict’s coming up. During the week of November 11-15, Jasper “Jax” Jacks (Ingo Rademacher) will fly off the handle. He agreed to help Nikolas Cassadine (Marcus Coloma) with mission to reclaim the Cassadine fortune, but things are getting out of hand.

Jax will be appalled by Nikolas’ link to Cassandra Pierce (Jessica Tuck). He’ll be even more horrified when he realizes Nik not only helped an international criminal escape, but that criminal kidnapped an innocent little girl! The news of Charlotte Cassadine’s (Scarlett Fernandez) snatching will spread, so that’ll bring worries for all parties involved.

Of course, Valentin Cassadine (James Patrick Stuart) will step up to protect his daughter – no matter the cost. Cassandra has messed with the wrong kid! The quickest way to bring out Valentin’s dark impulses is to target Charlotte or Nina Reeves (Cynthia Watros). Nina and Lulu Spencer (Emme Rylan) will also be emotional wrecks while they await Charlotte’s safe return.

Thankfully, Charlotte’s going to be just fine. As for Cassandra, it’ll be interesting to see what her fate looks like – but given what she’s done, GH buzz says it could be awful. In the meantime, Jason Morgan (Steve Burton) will have to make a statement. This probably ties in with Sam McCall’s (Kelly Monaco) upcoming trial, which seemingly isn’t going to turn out well for her.

During the week of November 18-22, Sam’s verdict will be revealed. She’ll be stunned and distraught around the same time, so it appears that verdict will be a guilty one. Sam has no need to fret though! GH fans know Jason Morgan (Steve Burton) will fight tirelessly to free his love – with a little help from Damian Spinelli (Bradford Anderson) of course.

Over with Ned Quartermaine (Wally Kurth), he’ll battle some suspicious. Could this be related to Nelle Benson’s (Chloe Lanier) recent marriage? It looks like Nelle married Shiloh Archer (Coby Ryan McLaughlin), so Ned may get updates and have a hunch why. This could alert the Quartermaines to a threat they didn’t expect!

Other General Hospital spoilers say Carly Corinthos (Laura Wright) will notice a chance in Mike Corbin (Max Gail). It seems likely that’ll involve a decline. Mike’s Alzheimer’s may get worse at a faster rate, so Carly will want to support Sonny Corinthos (Maurice Benard). Unfortunately, Carly will also keep a major secret from Sonny as part of a deal with Jax.

Jax’s biggest secret right now is the fact that Nikolas is alive, so that may be what he shares with Carly. She’s not the best at hiding things from the man she loves, which means Sonny’s suspicions will rev up soon. Speaking of suspicions, Anna will have plenty of those as well. She’ll wrap her head around Violet Barnes’ (Jophielle Love) existence, but she still won’t trust Hayden Barnes (Rebecca Budig) at all.

Finally, T.J. Ashford (Tajh Bellow) will pass along a diagnosis and a request. He may reveal what’s ailing Alexis Davis (Nancy Lee Grahn) and later ask for her blessing to marry Molly Lansing-Davis (Haley Pullos). There’s a good chance Alexis will offer her approval, so T.J. can put his proposal plan in motion soon.