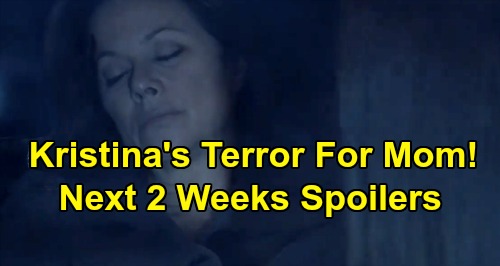 General Hospital (GH) spoilers for the next two weeks tease that some wild moments are coming up. During the week of December 2-6, danger will strike for Lucas Jones (Ryan Carnes) and Brad Cooper (Parry Shen). Julian Jerome (William deVry) tampered with Brad’s car thinking he’d off him and be done with it. He didn’t count on his own son getting behind the wheel instead!

Unfortunately, it looks like that’s where this storyline’s headed next. Lucas will speed down the highway as he demands the truth from Brad. Meanwhile, Kendra Lennon (Michelle Argyris) will load Alexis Davis (Nancy Lee Grahn) up in another car and rage over what she did to Kiefer Bauer (Christian Alexander).

Kendra will want Alexis to pay for mowing Kiefer down, so what does she have in mind? She might toss Alexis out of the car and let her get run over like Kiefer. Then again, a car crash may occur before Kendra can finish her plot. Whatever the case, Lucas probably won’t be able to brake. That’ll lead to Julian Jerome’s (William deVry) crushing discovery as well as Jordan Ashford’s (Briana Nicole Henry) puzzling investigation.

Next, Bobbie Jones (Jacklyn Zeman) will have some awful updates to pass along. Will that involve Lucas’ grim condition? Carly Corinthos (Laura Wright) will seek the help of a specialist in the week ahead. Perhaps she’ll step up and try to get some extra help for Lucas. As for Sonny Corinthos (Maurice Benard), he’ll support a guilt-ridden and terrified Kristina Corinthos-Davis (Lexi Ainsworth).

Kristina will undoubtedly feel terrible about Kendra going after Alexis. It was Kristina’s phony confession to Shiloh Archer (Coby Ryan McLaughlin) that led to Kendra’s revenge. Of course, GH spoilers say Julian deserves blame here as well. He reverted to dark behavior and will definitely pay the price for that. The guilt alone will be brutal!

Over with Nelle Benson (Chloe Lanier), she’ll meet her new cellmate – but there’s a good chance they’ve met before. Sam McCall (Kelly Monaco) needs a new cellmate since Cassandra Pierce (Jessica Tuck) was presumed dead, so it may be her not-so-lucky day. Going from Cassandra to Nelle might be a little less dangerous, but it isn’t exactly an upgrade.

Meanwhile, General Hospital spoilers say Willow Tait (Katelyn MacMullen) will be ready for the truth. It looks like she’ll confirm her pregnancy, but telling Harrison Chase (Josh Swickard) will be tough. Willow won’t know how she’s going to drop this baby bomb.

During the week of December 9-13, Willow will deal with a different shocker. Will that involve hearing about Brad and Lucas’ crash? Michael Corinthos (Chad Duell) may have to take “Wiley Cooper-Jones” (Erik and Theo Olson) in while his dads fight for their lives.

Back with Nelle, she’ll give Martin Gray (Michael E. Knight) a call. Nelle will likely want to pester Martin into moving her plan for freedom along. Elsewhere, Peter August (Wes Ramsey) will deceive Anna Devane (Finola Hughes). General Hospital spoilers say Peter will end up gathering his possessions, so he may plan to make a break for it.

Later, Laura Webber (Genie Francis) will somehow sabotage Peter’s plans. It should keep him around, which isn’t good news for Peter since Jason Morgan’s (Steve Burton) suspicions will be revving up. As for Elizabeth Baldwin (Rebecca Herbst), she’ll be at a loss for how to convey her deep gratitude. That may be over “Drew Cain” aka Franco Baldwin’s (Roger Howarth) successful procedure.

However, Liz will still have some questions, so maybe she’ll want to see just how much Franco remembers. We’ll keep you posted as other GH details emerge. Stay tuned to the ABC soap and don’t forget to check CDL often for the latest General Hospital spoilers, updates and news.