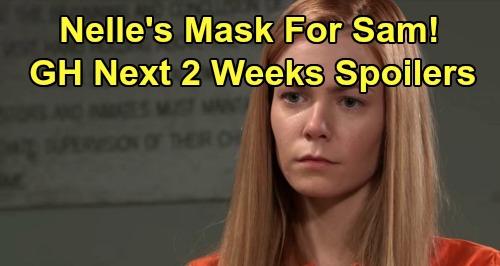 General Hospital (GH) spoilers for the next two weeks tease that the drama’s about to heat up in Port Charles. During the week of December 9-13, Sonny Corinthos (Maurice Benard) will be hopeful about Mike Corbin’s (Max Gail) new treatment. Griffin Munro (Matt Cohen) mentioned an enzyme study in Sweden, but he’s not certain it’ll help Mike.

However, Sonny’s willing to throw some money around and make sure Mike gets a spot. It’s worth trying if it gives Mike a little more lucid time with his family. General Hospital spoilers say Sonny will get some news one way or the other in the week ahead. He’ll definitely be counting on a miracle, but he’ll know it’s a long shot. Sonny will appreciate Griffin’s help no matter how things turn out.

Other GH spoilers say Lulu Spencer (Emme Rylan) and Olivia Quartermaine (Lisa LoCicero) will understand each other’s suffering. Neither one of them’s thrilled about Brook Lynn Ashton’s (Amanda Setton) return to town, but they’ll just have to deal with it. Olivia and Lulu need to rise above their anger when it bubbles up, but that’s easier said than done when it comes to Brook Lynn!

As for Ned Quartermaine (Wally Kurth), he’ll remain curious and concerned about his daughter. Brook Lynn is being harassed by someone, so that’s obviously troubling. It probably won’t be long until her past catches up with her, so Ned may get caught in the upcoming disaster.

Meanwhile, Ava Jerome’s (Maura West) behavior will intrigue Carly Corinthos (Laura Wright). Carly may learn about Ava checking out of Shadybrook and wonder if Ava’s really ready for that. If Ava makes a cryptic comment or two, it could leave Carly wondering if Ava learned the truth about Nikolas Cassadine’s (Marcus Coloma) survival.

Other General Hospital spoilers say Harrison Chase (Josh Swickard) will make a surprising discovery. Will that involve Julian Jerome’s (William deVry) guilt? Could Chase be on the verge of cracking the case? Even if all the puzzle pieces don’t come together yet, Chase will hopefully make some progress.

During the week of December 16-20, Elizabeth Baldwin (Rebecca Herbst) will battle her nerves as she waits. Peter August (Wes Ramsey) will also deal with anxiety for a very different reason. They’ll both probably be eager to find out the results of “Drew Cain” aka Franco Baldwin’s (Roger Howarth) memory procedure. Neither one of them will want “Drew” to come out of this with more Drew memories!

Later, Franco will face a devastating blow. It sounds like Franco will come back to Liz and catch up on everything he’s missed – like his betrayal with Kim Nero (Tamara Braun) and the real Drew Cain’s (Billy Miller) presumed death. Elsewhere, Nina will find out the true story. It sounds like she’ll confirm her Nikolas theory and try to figure out how to proceed.

Back with Sonny, he’ll spar with Carly on something. There’s a good chance Sonny will remain perturbed over Jasper “Jax” Jacks (Ingo Rademacher) and Carly’s defense of him. Sonny may become increasingly convinced that Carly’s hiding something big.

At Pentonville, Nelle Benson (Chloe Lanier) will act nonchalant. If she’s having to wear a mask and act that way, it probably means she’ll be irritated or nervous deep down. Nelle may have concerns about “Wiley Cooper-Jones” (Erik and Theo Olson) chaos blowing up on the outside. Nevertheless, she can’t let her disdained cellmate, Sam McCall (Kelly Monaco), see her sweat!

Next, General Hospital spoilers say Jordan Ashford (Briana Nicole Henry) will be merciless. Julian Jerome (William deVry) will blow his top soon after, so will Jordan call for his arrest? Although Julian feels guilty for what he’s done, he doesn’t want to be away from Lucas Jones (Ryan Carnes) right now. Julian would probably lash out if he was hauled off while Lucas is still fighting for his life.