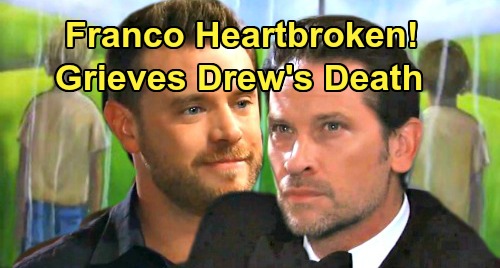 General Hospital (GH) spoilers tease that Franco Baldwin (Roger Howarth) should be back to his old self soon. During the week of December 9-13, Elizabeth Baldwin (Rebecca Herbst) will be deeply grateful. She’ll struggle to explain just how much! It’s possible Liz will thank “Drew Cain” again for the sacrifice he’s making for Franco, but it’s also possible this will happen after the procedure.

If it’s the latter, Liz will undoubtedly thank Andre Maddox (Anthony Montgomery) for pulling off his goal. Regardless, the memory reversal procedure is indeed coming up soon. GH buzz has suggested for a while now that Franco would be reunited with the “Friz” family by Christmas. It looks like that’ll turn out to be true, so Liz and her boys should get their holiday wish.

However, it won’t be total bliss for Franco once his mind returns to his body. Based on the latest General Hospital spoilers, it sounds like Franco won’t remember anything that happened while he was “Drew.” That part of Franco should be wiped clean, so Franco’s last memory will likely be trading places and saving Cameron Webber (William Lipton).

Of course, there’ll be a lot for Franco to catch up on. He’ll want to know everything he’s missed, but Liz may want to focus on the fact that Franco is back and can be himself again. She might argue that nothing else matters, but Franco probably won’t agree. When pressed, Liz may tell the whole ugly story – including the part where Franco slept with Kim Nero (Tamara Braun).

Franco couldn’t control his actions since he was essentially “Drew at the time, but he’ll still wrestle with guilt. He’ll hate that Liz was in pain, even if he wasn’t exactly the one hurting her. It was “Drew” and Kim that caused Liz’s sorrow, but she probably won’t want Franco to worry about any of that. Just having Franco back in her life should be enough.

Sadly, that’s not the only bombshell Franco will face. During the week of December 16-20, General Hospital spoilers say that Franco will face devastation. A crushing blow is on the way, so that likely involves learning the real Drew Cain (Billy Miller) was presumed dead in a plane crash. Drew and Franco had formed a nice friendship before the memory mayhem, so Franco should be gutted.

It’s great that someone’s finally going to properly grieve for Drew. It seems like the the existence of “Drew” was used to turn real Drew’s exit into a big nothing. Too many people were walking around acting like “Drew” was a legitimate version. Nobody has really given Drew’s demise the attention it deserves, but maybe Franco will at least take a moment to acknowledge how much he’ll miss his pal.