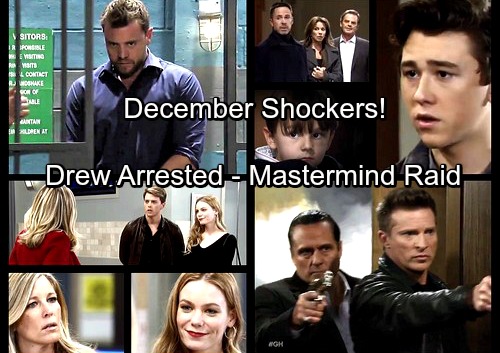 General Hospital spoilers indicate that there will be one bombshell after another in December as Andrew Cain (Billy Miller) finds himself behind bars, Josslyn (Eden McCoy) tells Oscar (Garren Stitt) that she has his paternity test results and Michael (Chad Duell) and Nelle (Chloe Lanier) delivers some very important news.

In an excellent new GH spoilers video below, Sam (Kelly Monaco) is left in disbelief after her husband Andrew Cain (Billy Miller) gets arrested. His PTSD has only gotten worse after his real identity was revealed. Drew’s mental health has deteriorated as he struggles to find his own memories. Yet, Sam is fighting for her husband and his innocence as she can be heard saying, “You are not arresting my husband.”

Josslyn tells Oscar that she has the paternity test results after they took Drew’s DNA from a glass he used. Oscar thinks that his father could be Drew, mostly because his mother Kim Nero (Tamara Braun) appears to have had an affair with him when was a Navy SEAL and before the memory experiment changed him into Jason Morgan (Steve Burton) in his mind. GH buss says there’s a strong possibility that Drew might indeed NOT be his biological father. 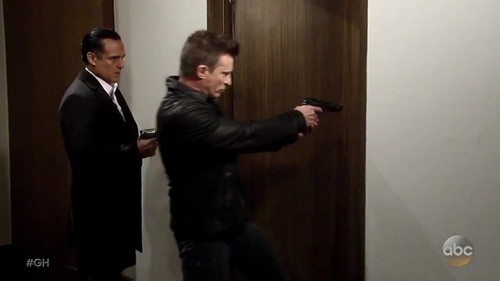 Meanwhile, Carly (Laura Wright) is left shocked as Michael and Nelle deliver some very important news. Nelle is smug and superior, looking as if she’s really got Carly beat – this indicates that she and Michael are announcing she’s pregnant. Knowing just how manipulative and ruthless Nelle is, she could be faking the pregnancy in order to keep her hooks in Michael.

If that weren’t enough, Sonny (Maurice Benard) and Jason (Steve Burton) burst into a room with guns drawn and come upon a mystery woman. They are likely in pursuit of the Mastermind, who is behind the twin study memory ordeal. General Hospital airs weekdays on the ABC network. In the meantime, don’t forget to check back with CDL for all the latest news, updates and spoilers on General Hospital and all of your favorite daytime television shows right here.