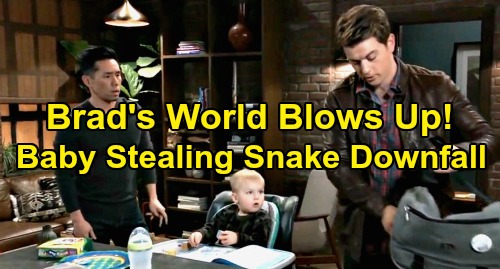 General Hospital (GH) spoilers tease that Brad Cooper (Parry Shen) will finally get what he deserves. Of course, GH is probably trying to drum up a little sympathy for Brad right now. Julian Jerome (William deVry) tried to murder him and now Brad’s husband is fighting for his life. Brad’s been hesitant to leave Lucas Jones’ (Ryan Carnes) side despite Epiphany Johnson’s (Sonya Eddy) warnings that he needs to rest.

However, General Hospital fans have good memories! It’s safe to say most viewers haven’t forgotten all the rotten things Brad’s done. Some GH watchers might feel sorry for him and others may not feel much at all, but nearly all of us can agree that Brad needs to pay. He stood by and watched Michael Corinthos (Chad Duell) grieve the loss of a baby knowing he was raising his kid.

It takes a pretty cold heart to see a man in that much pain and keep quiet. Michael has bonded with “Wiley Cooper-Jones” (Erik and Theo Olson) right in front of Brad, so he’s also seen their connection first-hand. It’s understandable that Brad doesn’t want to lose his family, but what about Michael’s loss? Brad’s sorrow certainly shouldn’t mean more than Michael’s.

It’s tough to feel bad for Brad when it comes to the attempted murder either. It’s a shame that Lucas had to get caught in the mayhem, but Brad pushed Julian to murder Liesl Obrecht (Kathleen Gati) not too long ago. Soon after that, it was Nelle Benson (Chloe Lanier) that Brad wanted to eliminate for good.

Brad may be crying some crocodile tears now and after the baby swap secret come out, but he’s a ruthless snake! If Brad’s vicious enough to want people dead, why should we care that Julian wanted him dead? It’s Lucas and Michael who are the true victims in this whole mess. Brad still deserves to go down in a big way – and you can bet he will down the road.

Naturally, General Hospital spoilers say Brad’s day of reckoning could be delayed once again. After all, there’s surely a reason Lucas has a head injury. This story is the perfect strategy to set up a good dose of amnesia and drag things out a bit longer.

Nevertheless, the truth’s bound to come out sooner or later. No matter how the Jonah shocker hits, Brad’s sure to face Michael’s fury as well as the wrath of Lucas, Sonny Corinthos (Maurice Benard), Carly Corinthos (Laura Wright) and Bobbie Spencer (Jacklyn Zeman). Willow Tait (Katelyn MacMullen) will hopefully get her chance to rip into Brad, too.