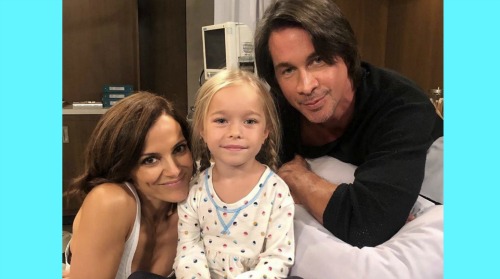 General Hospital (GH) spoilers reveal that Hayden Barnes (Rebecca Budig) should receive a crucial message. Jasper “Jax” Jacks (Ingo Rademacher) got Nikolas Cassadine (Marcus Coloma) to admit that staged an attack to drive Hayden out of town. Jax was appalled since Hayden left her beloved daughter behind, but he tried to make things right later. He left Hayden a voicemail informing her that there was no threat and encouraged her to return.

Of course, Hayden may feel like Jax is just downplaying the danger. Nikolas’ scheme was pretty convincing, so Hayden might think it’s wise to stay away. Then again, Hayden could start doubting herself as a mother. She might determine that she’s always putting herself in situations like this and determine that Violet Barnes (Jophielle Love) would be better off in Hamilton Finn’s (Michael Easton) care.

It’s even possible Hayden will run into genuine danger on her way back to Port Charles. Regardless, it doesn’t look like Hayden’s return is happening soon – although GH certainly left the door open. On Instagram, Jophielle Love’s account reposted Budig’s “Fayden” family throwback pic. She indicated that she missed her TV mom, and Violet will obviously miss Hayden as well.

In the comments, Eden McCoy (Josslyn Jacks) said what most of us are thinking. “This level of cute is not allowed,” McCoy insisted. Seriously, General Hospital struck gold by casting this kid. Jophielle’s a natural and even gave a little wink in a recent scene. She’s an adorable little superstar who’s going places.

Many General Hospital viewers would love to see Violet reunited with her mom, so would Budig be willing to return at some point? In an interview with Soap Opera Digest, Budig opened up about that. Her answer provided some hope for Hayden’s future in Port Charles.

“Obviously, I’m always open to coming back,” Budig said. “We’ll see what happens. I’m living my life and I have other things going on, but if the timing worked out and the story was right, yeah, it’d be fun.” It sounds like Budig’s ready to move on for now, but the fact that she’s on board with a potential return is a good sign. Budig admitted she’d love to share scenes with her favorite costars again.

“I would drop anything to work with Michael Easton and little Jophielle again – and sweet little Becky Herbst, too!” Budig said with a laugh. Let’s hope all the pieces come together so Budig can make a comeback as Hayden down the road.

Oh I miss my General Hospital @generalhospitalabc Mommy🥺🥺🥺🥰🥰😘😭❤️❤️❤️. ##Repost @rbjobud ・・・ TBT..to one of the first days I met the sweet @jophiellelove ..an instant connection. Thank you for all of your kind words.❤️