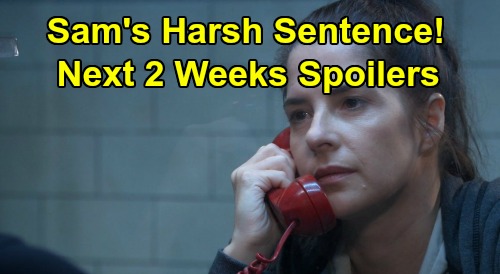 General Hospital (GH) spoilers for the next two weeks tease that some difficult blows are coming up. During the week of November 18-22, Kim Nero (Tamara Braun) will realize her future with “Drew Cain” aka Franco Baldwin (Roger Howarth) isn’t going to happen. “Drew” will end things and make preparations to help Franco reclaim his life.

Over with Sam McCall (Kelly Monaco), she’ll be distressed when her verdict comes in. Sadly, it seems this bench trial gamble will backfire spectacularly. The judge will likely declare Sam guilty and hand down a harsh sentence. Jason Morgan (Steve Burton) will hate seeing the panic in Sam’s eyes, but he’ll undoubtedly vow to score her freedom as soon as he can.

In order to do that, Jason will have to rely on Damian Spinelli (Bradford Anderson) more than ever. Since the justice system will have failed Sam, they’ll have to prove Peter August (Wes Ramsey) is the true guilty party. It won’t be long until Jason and Spinelli are uncovering some new clues, so let’s hope this leads to evidence.

Other General Hospital spoilers say Ned Quartermaine (Wally Kurth) will be surprised when his daughter returns. Brook Lynn Ashton (Amanda Setton) will show up out of the blue and leave Ned wondering what’s up. Olivia Quartermaine (Lisa LoCicero) will also spend some time with Brook Lynn, but a shocker will strike later. It’ll leave Olivia alarmed as she accepts Ned’s comforting embrace.

What exactly will disturb Olivia remains a mystery, but it looks like it could involve some danger. Back with Brook Lynn, she’ll pay Sonny Corinthos (Maurice Benard) a visit. It’ll be interesting to see if Brook Lynn has any kind of proposal to pass along. After all, there must be a reason for her sudden Port Charles comeback.

After Alexis Davis (Nancy Lee Grahn) is treated following her rat poison drama, T.J. Ashford (Tajh Bellow) will have a favor to ask. He’ll seek Alexis’ blessing on proposing to Molly Lansing-Davis (Haley Pullos), so Alexis should support his surprise. Kendra Lennon (Michelle Argyris) will also pop in and feign happiness about Alexis being on the mend.

Neil Byrne (Joe Flanigan) will learn something in a conversation that leaves him unsettled. The more Neil thinks about it, the more convinced he’ll be that he knows who tried to kill Alexis. Unfortunately, another murder attempt is brewing. Kendra Lennon (Michelle Argyris) will strike again during the week of November 25-29, but it appears Neil will follow the wrong trail until everything finally clicks. By then, it’ll be too late to stop Alexis’ next nightmare.

GH buzz points to Kendra running over Alexis, and it looks like at least one other car will be caught in the mayhem. Word has it Brad Cooper (Parry Shen) may be the driver of that car, but we’ll just have to see how it goes. We should point out Alexis is set to discover a bombshell just before this incident. It’s possible Alexis will learn the truth about “Wiley Cooper-Jones” (Erik and Theo Olson), which could be why Brad’s potentially involved here.

Over with Hayden Barnes (Rebecca Budig) will be troubled by Valentin Cassadine’s (James Patrick Stuart) behavior. He’ll be bullying Hayden over what he assumes to be her scheme with Jasper “Jax” Jacks (Ingo Rademacher) and the others. Valentin won’t know Nikolas Cassadine (Marcus Coloma) is alive, but that’s exactly the kind of dirt he’d like to pry out of Hayden. Their pier faceoff could turn into quite a battle.

Finally, Hamilton Finn (Michael Easton) will have a heartfelt discussion with Anna Devane (Finola Hughes). They’ll try to get on the same page about their feelings for each other and where they go from here. Now that Violet Barnes (Jophielle Love) is in the picture, it pulls Hayden Barnes (Rebecca Budig) back into it, too. That’s something they’ll all have to figure out how to navigate – and something tells us their plans will go awry!