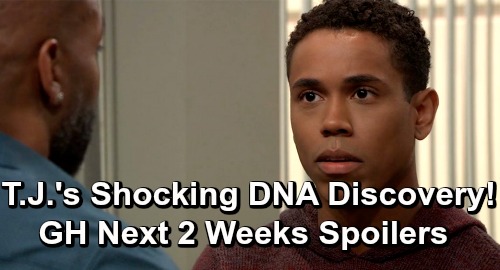 General Hospital (GH) spoilers for the next two weeks tease that some shockers are in store. During the week of June 24-28, Willow Tait’s (Katelyn MacMullen) court delay will bring major drama. Diane Miller (Carolyn Hennesy) will stall as long as she can, but the judge won’t be pleased. Shiloh Archer’s (Coby Ryan McLaughlin) ruthless attorney will definitely milk Willow’s tardiness for all it’s worth.

Later, Harrison Chase (Josh Swickard) will be forced to make a surprising arrest. Will Willow be held in contempt of court and taken into custody? Could it be related to some other bombshell that comes out instead? Either way, Shiloh should be looking awfully smug and satisfied.

Meanwhile, Kim Nero (Tamara Braun) will get the wrong idea. She recently invited Drew Cain (Billy Miller) over for dinner and seems to be planning a baby discussion. Unfortunately, something Drew says will make Kim think they’re on the same page. Drew has no interest in having a kid with Kim, but she’ll believe he does when she plants a kiss and tries to escalate things.

After Drew sets Kim straight, she’ll be distraught enough to call Shiloh. General Hospital spoilers say Shiloh will head over to Kim’s apartment, so there’s always the possibility that Kim will have sex with him. Grief has torn Kim apart and appears willing to do whatever it takes for a baby.

Other GH spoilers state that Brad Cooper (Parry Shen) will try to find his strength. He’s been a real wimp throughout this storyline, but that may change soon enough. After the Willow debacle in court, Shiloh may have the upper hand. It won’t be long until Brad takes charge and does everything in his power to protect his family. Perhaps Brad can use that shady side of his to his advantage!

During the week of July 1-5, familiar sparks will fly for Jason Morgan (Steve Burton) and Sam McCall (Kelly Monaco). They’ll take some time to celebrate their love and maybe hit the sheets as well. Over with Harrison Chase (Josh Swickard), he’ll be distraught over the situation with Willow. That’ll lead Chase to confide in his brother, so Hamilton Finn (Michael Easton) will hopefully have good advice.

Next, Mac Scorpio (John J. York) will do a little legal maneuvering. He’s the PCPD’s interim police commissioner, so Mac will have some power. Will he get Willow out of her jam? Across town, T.J. Ashford (Tajh Bellow) will be on a DNA hunt. Jordan Ashford’s (Briana Nicole Henry) family was mentioned during her kidney crisis, so T.J. might hope to track down some long-lost relatives.

Then again, this could be related to another character. We don’t know much about Dev’s (Ashton Arbab) family other than he doesn’t want to talk about them. Perhaps Dev’s got another Port Charles connection that even he doesn’t know about. T.J. could be tasked with doing some DNA research and find out more. Regardless, whatever T.J. comes up with should be surprising.

Elsewhere, Kristina Corinthos-Davis (Lexi Ainsworth) will have Willow on her mind. She’ll learn more about Willow’s troubles and wish she could help. Kristina owes Willow a lot since her info on Shiloh finally helped Kristina break free. Let’s hope Kristina can find a way to repay the favor or at least make things slightly less bleak for Willow.