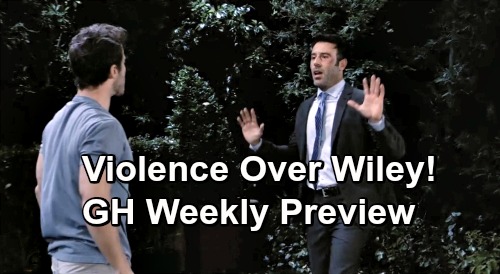 General Hospital (GH) spoilers preview teases that battle lines will be drawn this week as Shiloh Archer’s (Coby Ryan McLaughlin) quest to find his son heats up. The new GH promo preview for the week of June 24 shows some major altercations, angst, and urgency over the truth about “Wiley Cooper-Jones” as battle lines are drawn.

We’ll start out the week with some legal wrangling, as Shiloh, Willow Tait (Katelyn MacMullen), and their lawyers have their first court date. It will be an important hearing, as Willow and her lawyer will learn for the first time exactly what Shiloh knows about Willow’s pregnancy and her baby. That is, if Willow ever makes it to the hearing.

As GH viewers will remember, Willow has been detained at the school and is having a hard time getting away. It won’t look good for her case to have her absent from the hearing, and the judge could rule adversely toward her in some way.

We’ll have to tune in to see exactly what happens at the hearing, but there is some indication from the promo that Shiloh will be agitated afterwards. He is shown blowing up in conversation with his lawyer. “She’s the one that broke the law, and I’m not going to let her get away with it!” he yells.

The new GH promo also shows a physical altercation between Lucas Jones (Ryan Carnes) and Shiloh, as Shiloh approaches Sam McCall (Kelly Monaco). Of course, Lucas won’t want Shiloh anywhere near his sister, but he’s also in the know that Shiloh is Wiley’s biological father, and he sees Shiloh as a serious threat.

Lucas will rush Shiloh as he sees him harassing Sam and push him away hard. Afterwards, Sam and Lucas will have a tense conversation, during which Sam tells Lucas that Shiloh’s past is catching up with him. She’s likely referring to Jason Morgan (Steve Burton) and Michael Corinthos’ (Chad Duell) mission to find out what happened with Willow’s dad’s death in Beecher’s corners.

As GH viewers will remember, Willow’s dad died of a drug overdose that was ruled as intentional, but Michael and Jason suspect that Shiloh was responsible for the death. Sam will undoubtedly try to reassure Lucas that they’re all working on an angle to neutralize Shiloh, but that probably won’t calm Lucas down much.

Lucas knows that because Shiloh wasn’t told about Willow’s pregnancy or about the adoption, then he’s got legal rights as a father. Lucas stands to lose his family with Brad and Wiley, and he’s terrified.

But of course there’s another angle here, and that involves Julian Jerome (William deVry), who is also shown in the promo telling Alexis Davis (Nancy Lee Grahn) that “there’s no way in hell that Shiloh’s going to get his hands on Wiley.” That sounds like an ominous threat, and we know that Julian means it.

Finally, we should note that there’s something that’s glaringly unaddressed in the new GH promo, and that’s the fact that Wiley is actually Michael’s son Jonah Corinthos. It appears that Brad Cooper (Parry Shen) will continue to keep his mouth shut about the fact that Willow and Shiloh’s baby (the original Wiley) died, even as Shiloh threatens to take away his son.

It looks like we’re in for an exciting week! Stay tuned to the ABC soap and don’t forget to check CDL often for the latest General Hospital spoilers, updates, and news.