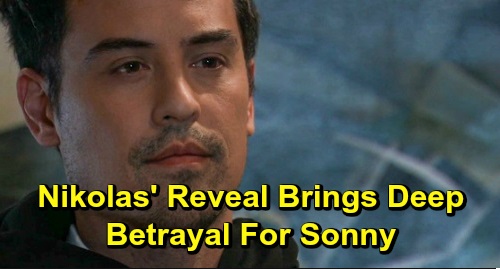 General Hospital (GH) spoilers tease that Sonny Corinthos (Maurice Benard) will remain fixated on Carly Corinthos’ (Laura Wright) secret. Now that he knows she has one, he just won’t be able to let it go. Sonny will naturally worry about Carly and whatever Jasper “Jax” Jacks (Ingo Rademacher) has gotten her into. However, there’ll be more than just concerns driving his agitation.

In the coming weeks, the friction between Carly and Sonny will get worse. General Hospital spoilers say Sonny will struggle with secret hanging over them. He thought they’d be past keeping huge things from each other by bow. Sonny can tell Carly’s sitting on something major, so he doesn’t like being kept out of the loop. That’s especially true since it involves hiding the truth for Jax.

Sonny naturally feels like Carly’s being loyal to her ex instead of him. Nevertheless, Carly feels it’s best to keep Sonny in the dark for now. It looks like she’ll stand her ground on that, but Sonny should lean the big secret by the end of the month.

GH spoilers say Sonny will feel a deep sense of betrayal during the week of December 30-January 3. There’s a good chance that’ll be after Sonny finds out about Nikolas Cassadine’s (Marcus Coloma) survival. It’s possible Carly will come clean privately, but it’s also possible Sonny will learn the truth after Nik’s publicly exposed. The latter could make Carly’s betrayal even worse for Sonny.

Of course, Sonny’s going to be upset any way you slice it. He’ll probably view this secret as even more massive than he expected. Sonny may lash out at Carly for her role in helping Nik hide from Spencer Cassadine (Nicholas Bechtel) and the rest of his loved ones. He cares about Spencer a great deal, so you can bet his name will come up in the aftermath.

There’s been buzz about a potential Spencer comeback – and that buzz got stronger after pic of Spencer was shown recently. That seemingly puts any recast talk to rest. The real deal should be coming home to deal with all the Nikolas chaos eventually.

As for Sonny, his marriage will be in turmoil thanks to Carly’s actions. General Hospital spoilers say forgiveness may not come easily for Carly, who’ll desperately wants to fix this. It sounds like some intense “CarSon” drama’s looming, so stay tuned. We’ll give you updates as other GH news comes in. Stick with the ABC soap and don’t forget to check CDL often for the latest General Hospital spoilers, updates and news.