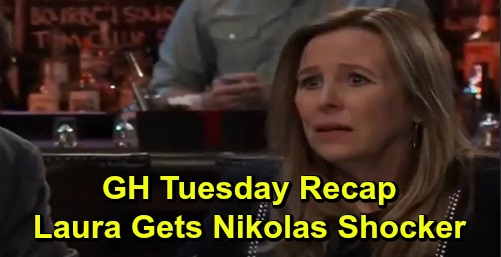 General Hospital (GH) spoilers recap for Tuesday, December 17, reveal that Ava Jerome (Maura West) stood by triumphantly while the portrait of Helena Cassadine (Constance Towers) burned in front of everyone’s eyes at the auction. Valentin Cassadine (James Patrick Stuart) was beside himself with glee, since he assumed that the portrait and the codicil contained therein were gone for good.

Ava then instructed Trina Robinson (Sydney Mikayla) to put something in the safe in the storage room, and while there she noticed Nikolas Cassadine (Marcus Coloma), whom she only saw from behind. Trina asked him who he was and what he was doing there, and realizing he was a thief, threatened to call the cops, so Nikolas took off. Trina came back and loudly let Ava know that someone had been in the storage room.

Once mostly everyone had cleared out of the gallery, Curtis Ashford (Donnell Turner) noticed that Ava gave Trina some cash as a bonus for her good work. Curtis then questioned Ava about whether she was in cahoots with Valentin to destroy the portrait, but Ava denied it. Curtis asked who she was working with, but she refused to answer.

Later, Curtis tracked down Trina and wanted to know if she had recognized the intruder. Trina gave him attitude, but Curtis pressed on, wondering if she knew who destroyed the portrait. Trina remained loyal to Ava and didn’t get sucked into Curtis’ line of questioning, and she didn’t give up any details.

On the pier, Jasper “Jax” Jacks (Ingo Rademacher) met up with Nikolas, and Nikolas declared that his vendetta against Valentin is still on, even though portrait is gone. Jax declared that they were allies against Valentin only until New Year’s Eve, at which point he’d deal with Valentin in his own way. Nikolas then went back to the gallery, where Ava was waiting for him, gun in hand.

Next, Dustin Phillips (Mark Lawson) dove in the pier to retrieve Charlotte Cassadine (Scarlett Fernandez) while Lulu Spencer (Emme Rylan) dialed 911. Charlotte was ok, just in shock and very cold, and at the hospital she was given a clean bill of health by Hamilton Finn (Michael Easton). All the adults in Charlotte’s life gathered at the hospital, and Valentin wanted to know what happened.

Rocco Falconeri (O’Neill Monahan) spoke up and said that Charlotte was trying to prove that her bodyguard existed. At that point, Laura spoke up about Charlotte’s claim that Valentin had hired a bodyguard, and Valentin blamed the whole incident on Lulu’s neglect, which Lulu found outrageous. Ultimately, Valentin declared that he was going to take Charlotte home and that he was going to file for sole custody.

In Charlotte’s room, she proceeded to tell Laura that she really thought that her secret bodyguard would save her. Laura gently confronted her about it, saying that the bodyguard was just pretend. But Charlotte said that her mother had a picture of him on her phone. Lulu’s phone happened to be sitting nearby, so Charlotte found the picture of Nikolas and showed it to Laura, who reacted in shock.

Next, Franco Baldwin (Roger Howarth) woke up and immediately recognized Elizabeth Baldwin (Rebecca Herbst) and Cameron Webber (William Lipton). He was fully Franco, and Elizabeth and Cameron were joyously happy. Franco wondered how long he had been away and was startled to learn that it had been months. Franco had questions about what had happened while he was away, but Elizabeth put him off for the time being so they could enjoy their reunion.

Meanwhile, out in the hall, Anna Devane (Finola Hughes) remained suspicious of Peter August (Wes Ramsey). She watched his reactions closely when he learned that Franco had woken up as Franco and not as “Drew,” clearly worried that Jason Morgan’s (Steve Burton) theory about Peter hiring the thug might be true. Later, Anna shared Jason’s theory privately with Finn, who supported her as she remained deeply worried.

Franco then asked to talk with Peter, which momentarily got Peter worried. But Franco just wanted to thank Peter for saving his life. After Peter vacated the room, Elizabeth and Franco spent some time alone together cuddling. Elizabeth noted that they had a lot to talk about, but that she was so glad he was back. Franco said that nothing was ever going to keep him away from her, and they kissed.