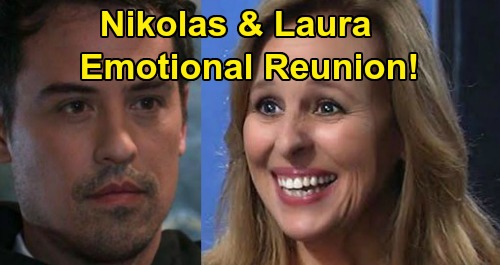 General Hospital (GH) spoilers tease that we’ll see Nikolas Cassadine’s (Marcus Coloma) softer side again. We’ve seen a couple flashes of it – like when Nikolas tenderly held Ava Jerome (Maura West) after she fainted – but Nik’s return has been mostly dark so far. However, Nikolas naturally has a soft spot for his mother. Laura Webber (Genie Francis) may be the reason we see a gentler Nikolas soon.

GH fans know Nikolas seemed emotionally affected by his close call with Laura. As she stood outside Jasper “Jax” Jacks’ (Ingo Rademacher) door, it was easy to see he wanted to reach out. Laura could sense Nikolas’ presence, even if she couldn’t quite put her finger on the whole experience. It was a powerful moment and there may be more of those moving forward.

During the week of November 18-22, General Hospital spoilers say Nikolas’ plot will press on. Unfortunately, there’ll inevitably be more hiccups along the way. Nikolas is determined to bring down Valentin Cassadine (James Patrick Stuart) and reclaim what was stolen from him. His fight to do that will get tougher, especially since Laura’s involved in this codicil search.

Laura’s awfully close to the situation and will remain in touch with Jax about it. On November 22, Laura will be meeting with Jax when a surprise visitor interrupts. There’s a chance that could be Spencer Cassadine (Nicolas Bechtel), but there’s been no word of his return so far. Instead, that visitor may be Nikolas himself.

If Nik overhears Laura opening up about her struggles following his death, he may feel the need to reveal he’s alive. Nikolas’ guilt may become too much to bear. The timing makes sense considering November 22 is so close to Thanksgiving. It’s easy to imagine Nikolas shocking Laura for the Friday cliffhanger and then explaining the following Monday.

Laura would have another day to convince Nik that they should let Lulu Spencer (Emme Rylan) in the loop. Lulu will be joining the secret club eventually, so maybe they can share some private family moments of gratitude on November 27. That’s when Port Charles will celebrate Thanksgiving, so let’s hope General Hospital will deliver some emotional reunions for Nikolas.

Do you hope Nikolas confesses to Laura soon? Should they tell Lulu, too? We’ll give you updates as other GH news comes in. Stay tuned to the ABC soap and don’t forget to check CDL often for the latest General Hospital spoilers, updates and news.