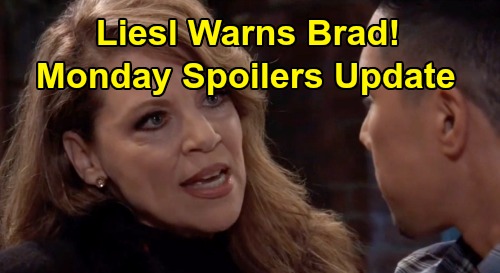 General Hospital (GH) spoilers update for Monday, November 11, teases Lucas Jones (Ryan Carnes) will some answers. At the cemetery, Lucas will confront Julian Jerome (William deVry) about Brad Cooper’s (Parry Shen) claims and the incriminating recording. Julian won’t deny that he blackmailed Brad and tried to blow up their marriage. He’ll insist he was trying to do what was best for Lucas and “Wiley Cooper-Jones” (Erik and Theo Olson).

Lucas previously thought he was finally getting somewhere in his relationship with Julian. He felt like they were starting to bond as father and son, but Julian chose to destroy that. As a result, Lucas will decide that he’s done. He can’t keep giving Julian chances only to be let down again and again. Lucas will disown Julian and insist that he never wants to hear from him again.

Other General Hospital spoilers say Jason Morgan (Steve Burton) will fret about Sam McCall (Kelly Monaco). He’ll argue with Jordan Ashford (Briana Nicole Henry) about something tied to Sam’s imprisonment, but Jordan will think he needs to cool it. She’ll push Jason to back off for Sam’s sake, so he’ll probably do so reluctantly.

Jason will also track down Jasper “Jax” Jacks (Ingo Rademacher) and share his concerns about their mutual loved ones. They both care about Carly Corinthos (Laura Wright) and Josslyn Jacks (Eden McCoy), so Jason will push Jax to be there for them. He’ll think Joss needs her father’s support and Carly needs Jax backing her up.

Next, let’s talk about Nikolas Cassadine’s (Marcus Coloma) latest blunder. During a confrontation with Jax, Nikolas will admit he helped Cassandra Pierce (Jessica Tuck) escape. Unfortunately, Cassandra then escaped from Nik. Jax will flip out over their connection and Nikolas’ getaway plan gone wrong. He’ll insist he didn’t sign up for this, but things are about to get worse.

That’s because Cassandra just approached a fearful Charlotte Cassadine (Scarlett Fernandez) and warned her not to scream. Cassandra insisted Charlotte could save Nina Reeves (Cynthia Watros) but only if she does exactly what she’s told. Charlotte will still end up snapping at Cassandra during this kidnapping crisis. She’ll hold out hope that Valentin Cassadine (James Patrick Stuart) will locate them, but Cassandra won’t think that’ll happen thanks to her excellent hiding spot.

As for Valentin, he’ll argue with Laura Webber (Genie Francis) about the portrait, which will seem trivial soon enough. General Hospital spoilers say Lulu Spencer (Emme Rylan) will discover Charlotte has vanished from Kelly’s. She’ll be terrified, especially when she learns deadly Cassandra’s on the loose.

Valentin will get a dreadful phone call, so that might be Lulu with the news of Charlotte’s vanishing act. Of course, Cassandra will surely make a call of her own later. She can demand pretty much whatever she wants with Charlotte at her mercy! Valentin, Nina and Lulu will all face a total nightmare until Charlotte’s home safe and sound.

Elsewhere, Liesl Obrecht (Kathleen Gati) will grill Brad about how he’s covering his tracks. She managed to get through the Sasha Gilmore (Sofia Mattsson) unscathed, so she won’t want Brad blowing this for her. However, Brad dragged Liesl into the story he told Lucas, and she’s not going to be pleased. Liesl may warn that if this comes back to bite her, she’ll make Brad pay the price.

Across town, Hamilton Finn (Michael Easton) will share some heartwarming moments with his daughter. Finn and Violet Barnes (Jophielle Love) have already formed an easy bond, so it’ll be sweet to see that develop even further. Hayden Barnes (Rebecca Budig) will certainly appreciate the connection Finn now has with Violet. They’ll all enjoy some family time on Monday, so don’t miss these cute GH scenes.

It looks like some great stuff’s coming up in Port Charles. We’ll give you updates as other GH details emerge. Stay tuned to the ABC soap and don’t forget to check CDL often for the latest General Hospital spoilers, updates and news.