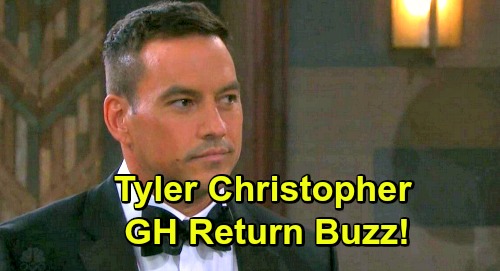 General Hospital (GH) spoilers tease that this is the perfect time for a Cassadine comeback. If you watch Days of Our Lives or at least keep up with what’s going on in the soap world, you might’ve heard that Tyler Christopher (ex-Nikolas Cassadine) just wrapped his run. He played Stefan DiMera, but Brandon Barash (Johnny Zacchara) is now taking over as a recast.

Christopher thanked Days fans for coming along for the ride on his Twitter account. He got some high praise from Ron Carlivati, DOOL’s current head writer and the former head writer of GH. “Thank you @Tyler2929 for your always thoughtful and totally fearless portrayal of Stefan DiMera,” Carlivati tweeted. “It was wonderful working with you this time around and I sincerely hope it’s not our last!”

Christopher also responded to a tribute video from a Tyler Christopher fan account. He also suggested we hadn’t seen the last of him. “You guys rock! I’ll be around,” Christopher said. Naturally, all of this has led to speculation about where Christopher might end up. Many General Hospital fans are hoping Christopher will pop back up as Nikolas one day soon.

The timing would be great since Alexis Davis (Nancy Lee Grahn) has been exploring some Cassadine history and we still don’t know who kidnapped Cassandra Pierce (Jessica Tuck). Someone with a Cassadine ring whisked Cassandra away, so it could easily have been Nikolas.

Plus, Laura Webber (Genie Francis) could use some happiness right about how. She’s struggling with Dr. Kevin Collins’ (Jon Lindstrom) betrayal, so she deserves the joy of a warm reunion with Nikolas. The show will need something big since the serial killer story is over, so Nikolas’ return from the dead would be ideal.

Christopher finished filming at Days several months ago, but his General Hospital comeback may be more likely now that he’s actually finished airing. This departure is getting a lot of attention on social media. Christopher also just scored a lead actor Daytime Emmy nomination. That’s one more way he can build buzz and hopefully gain GH’s attention.