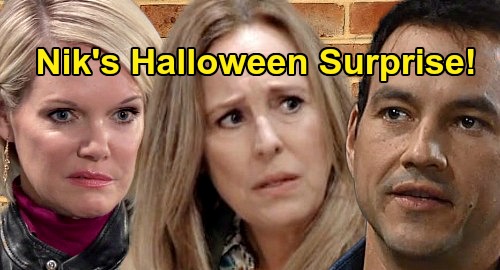 General Hospital (GH) spoilers reveal that there’s someone mysterious lurking in Port Charles. On the episode airing October 17, GH fans saw through the eyes of one curious character. General Hospital didn’t divulge who was watching, but somebody was interested in Laura Webber (Genie Francis) and Ava Jerome’s (Maura West) interaction.

This person watched out of sight at the Metro Court, which is obviously a pretty risky thing to do. He or she evidently doesn’t want to get caught, so it’s not a wise location to visit. However, this is a soap and people do risky things all the time. We can’t go by logic since the illogical is the norm in Port Charles.

After all, GH has to keep setting up clues about what’s to come. Who’s the one person that has a connection to both Laura and Ava? Nikolas Cassadine (Tyler Christopher). It makes sense that Nikolas would be spying on them considering how many Nik hints we’ve already had. There’s clearly a Nikolas comeback storyline in the works.

In fact, Nikolas’ return could be rapidly approaching. This spying scene backs up speculation that GH could play a Halloween trick. General Hospital spoilers say a masked man will watch Ava at the upcoming party. He’ll follow Ava back to the gallery, where he’ll presumably take off the mask and reveal his face.

Most GH fans would naturally suspect Ryan Chamberlain (Jon Lindstrom), but the show could easily reveal Nikolas instead. That may be why there hasn’t been a peep about Tyler Christopher’s comeback or a recast. General Hospital may want it to be a huge surprise.

If the person who spied is the masked man, it can’t be Ryan. He was locked up tight at Pentonville when the spying occurred. Plus, there’s other potential evidence that Nikolas could be back soon. GH buzz has it Jasper “Jax” Jacks (Ingo Rademacher) and Hayden Barnes’ (Rebecca Budig) secret partner will be revealed just in time for Halloween.

When you add up the timing and link these stories together, it seems likely Nikolas’ return is indeed coming up soon. Of course, that leads to more questions. Where has Nik been all this time? Why did the psychic feel Nikolas was in danger? Will Nik want a favor from Ava before he goes public?

The biggest question of all is: Who will play Nikolas? The fact that they’re being so secretive suggests it might be someone we recognize, so let’s hope Tyler Christopher’s return is looming. General Hospital spoilers say major Nik drama’s ahead no matter what, so stay tuned. We’ll give you updates as other GH news comes in. Stick with the ABC soap and don’t forget to check CDL often for the latest General Hospital spoilers, updates and news.