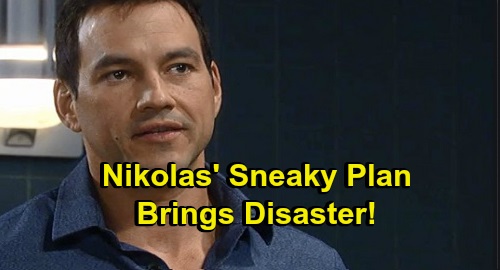 General Hospital (GH) spoilers tease that there’s more Nikolas Cassadine (Tyler Christopher) drama to come. GH has offered some great clues about Nikolas’ survival. For starters, Ava Jerome’s (Maura West) first psychic couldn’t feel Nik’s presence on the other side. Sibley Gamble (Veronica Cartwright) suggested there could be many explanations for that, but Chelsea Lambas (Jen Ray) had a more elaborate hint.

During Laura Webber’s (Genie Francis) psychic reading, Chelsea insisted her son was in danger – and not the one that’s in Africa. Of course, Chelsea was referring to Nikolas. She’s proven reliable several times, so we have every reason to suspect Nikolas is returning down the road.

There’s also the little matter of the codicil to Mikkos Cassadine’s (John Collicos) will, which would make an alive Nikolas the true Cassadine heir. GH wouldn’t be stirring all this up without a Nik comeback, so it’s just a matter of when it’ll happen and who’ll be playing the part. Many General Hospital viewers are naturally hoping Tyler Christopher reprises the role, but a recast is also an option.

Either way, Nikolas will have to escape this danger Chelsea mentioned. She claimed Nikolas was IN danger, but what does that mean exactly? Does it mean Nik is currently in a tight spot or that his plan could bring disaster? Perhaps Chelsea was actually predicting that Nikolas’ current path will lead to peril. She is a psychic after all! Chelsea’s in the business of predicting what’s to come.

Nikolas may be working on a secret plot to topple Valentin Cassadine’s (James Patrick Stuart) empire and reclaim it as his own. He might’ve just decided to stay hidden until Hayden Barnes (Rebecca Budig) and Jasper “Jax” Jacks (Ingo Rademacher) prepare the way. Nikolas may be getting all his ducks in a row – possibly even through an alliance with Cassandra Pierce (Jessica Tuck).

However, Cassandra is a wild card and so is Valentin. In fact, Valentin could fight back in a big way. Could Nikolas’ sneakiness land him in the danger Chelsea promised? Is he in peril because his plan will spark Valentin’s revenge?

General Hospital spoilers say the Sasha Gilmore (Sofia Mattsson) secret is set to explode soon. As a result, Nina Reeves (Cynthia Watros) will likely dump Valentin. Can you imagine how furious Valentin will be if his fortune is gone, too? Valentin will be a man with nothing left to lose.

That could certainly lead to a deadly situation for Nikolas. His loved ones may fear he’ll truly perish this time, but Nikolas should pull through one way or another. General Hospital wouldn’t go to all this comeback trouble only to have Nikolas face a grim fate! We’ll give you updates as other GH news comes in. Stay tuned to the ABC soap and don’t forget to check CDL often for the latest General Hospital spoilers, updates and news.