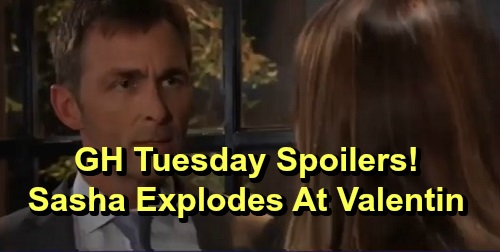 General Hospital (GH) spoilers for Tuesday, September 17, tease that Kim Nero (Tamara Braun) will struggle to resist temptation. She knows Franco Baldwin (Roger Howarth) isn’t the real Drew Cain (Billy Miller), but that hasn’t stopped him from making her heart flutter. Kim won’t be able to fight her feelings for much longer as Franco keeps telling her everything she wants to hear.

GH fans can expect Kim and Franco’s kiss to escalate. They’ll end up sleeping together, which is a terrible idea for many reasons. For starters, Elizabeth Baldwin (Rebecca Herbst) will be on her way over soon. Harrison Chase (Josh Swickard) will fill Liz in on his recent meeting with Franco, which involved taking off the ankle monitor. He’ll also mention that he found Franco at Kim’s place, so that’s where Liz will head, too.

Will Liz walk in on Franco and Kim’s hot hookup? Time will tell, but it’s clear that things are about to get even more complicated. Meanwhile, Brad Cooper (Parry Shen) will want to make sure his Liesl Obrecht (Kathleen Gati) problems are over. Julian Jerome (William deVry) seemingly tampered with Liesl’s car, but did he really? No one knows exactly what went on under that hood at the last second.

Even if Julian simply botched the sabotage effort, Liesl’s going to be just fine. She’ll be highly amused when she realizes Valentin Cassadine (James Patrick Stuart) is in another jam. Of course, that jam involves Sasha Gilmore (Sofia Mattsson) spilling the beans. She revealed her fake daughter status to Michael Corinthos (Chad Duell), and it’s obvious Valentin knows what’s up.

General Hospital spoilers say Valentin will confront Sasha on Tuesday. He’ll do his best to keep her mouth shut – at least when it comes to Nina Reeves (Cynthia Watros). Valentin may hope Michael will come around and see that telling Nina the truth would only hurt her. However, he’ll worry Sasha’s guilt will bring another confession to her fake mom.

During their argument, Sasha will get fed up with Valentin’s attempts to control her. She’ll shout that Valentin should mind his own business and stay out of hers. Nina will waltz in and wonder what she missed. That should bring some awkward moments as Sasha decides her next move and Valentin sweats it out.

At GH, Willow Tait (Katelyn MacMullen) will bump into Michael and immediately notice he’s upset. Michael may not divulge the details, but he might admit he’s having problems in his love life. He may feel like he always falls for dishonest women, but Willow should offer a pep talk. She might insist Michael just sees the good in everyone, and that’s something she admires in him a great deal.

On The Haunted Star, Laura Webber (Genie Francis) and Curtis Ashford (Donnell Turner) are in for a shock. Cassandra Pierce (Jessica Tuck) will pop out of the closet and pull a gun on them, so they’ll wind up in a deadly situation. Curtis will do whatever he can to reason with Cassandra. He’ll point out that they’re all working against Valentin and suggest they should just join forces.

Curtis will push Cassandra to share what she knows, but she’ll be hesitant to open up. In the end, Laura and Curtis will have to gain the upper hand. They’ll pry the gun out of Cassandra’s hands and turn it on her, so they’ll have all the power soon enough.

Finally, Hamilton Finn (Michael Easton) will stop by Andre Maddox’s (Anthony Montgomery) room. He’ll wonder if Andre can reverse Franco’s memory issues or not. Unfortunately, that’s a question with a complicated answer. Andre can indeed perform a procedure that might help, but there’s no guarantee it’ll work. There could also be no change. Franco could even find himself in a vegetative state or have intensified Drew memories, so this is awfully messy!