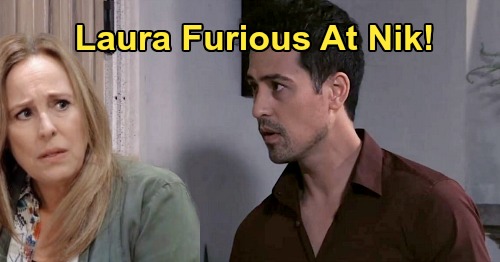 General Hospital (GH) spoilers reveal that Laura Spencer (Genie Frances) seems to be in complete denial about her son, Nikolas Cassadine (Marcus Coloma). Nik certainly isn’t a saint and never has been. How can Laura ignore the obvious signs that he’s alive?

Nik Has Done This Before

GH fans know Nik has faked his death before. The only difference is his son Spencer Cassadine (Nicholas Bechtel) was in on it. However, Spencer doesn’t know how to keep his mouth shut anymore. Nik can’t risk Spencer blowing this or putting himself in harm’s way by confronting Valentin Cassadine (James Patrick Stuart).

Nikolas never bothered to tell his mother the last time he pulled this stunt, so why exactly is Laura so convinced he wouldn’t do it again? Instead, Laura immediately believed Ava Jerome (Maura West) must’ve been out of her mind. Now Charlotte Cassadine (Scarlett Fernandez) has pointed out a “secret bodyguard” that looks like the uncle she never knew. Shouldn’t the pieces be starting to add up by now?

Ava might’ve been haunted by her daughter, Kiki Jerome (Hayley Erin), but she was partially responsible for her death. Ava had nothing to do with Nik’s supposed demise. Yes, Ava sold out to Valentin, but that’s no reason for Nik to haunt her – even as a figment of Ava’s imagination. Laura would rather see Ava committed than to consider that Nikolas has faked his death yet again.

Maybe Laura should investigate a little more. Ava is out of Shadybrook now, so Laura should really pay her a visit. Although Ava is scheming and doesn’t want to spill the beans just yet, she might drop a hint or two like she did with Carly Corinthos (Laura Wright). Laura apparently needs more clues since the ones she has already aren’t cutting it.

Laura isn’t even considering the idea that Charlotte’s claims are correct. It’s not like Charlotte would know enough about Nik to conjure him up from memory. Laura should have asked more questions to get to the truth instead of readily accepting that Charlotte made him up. It doesn’t make sense to completely shut down the option that Nik’s alive since he already faked his death before.

Even Nina Reeves (Cynthia Watros) put the pieces together to figure this out, although she did have firm proof through a Cassadine ring. Still, Laura Webber (Genie Francis) had Chelsea Lambas’ (Jen Ray) prediction about her other son – meaning NOT Lucky Spencer (Jonathan Jackson) – who was in danger. You’d think Laura would at least be asking herself if Nik could be alive as Chelsea suggested.

General Hospital spoilers say Laura’s going to feel confused and duped when he truth finally comes out. She’ll be a whole mess of emotions, but her fury could come after the initial burst of relief wears off. Laura may be mad at herself for not seeing the truth and furious with Nik for keeping her in the dark!

It sounds like some great drama’s looming on General Hospital. We’ll give you updates as other GH news comes in. Stick with the ABC soap and don’t forget to check CDL often for the latest General Hospital spoilers, updates and news.