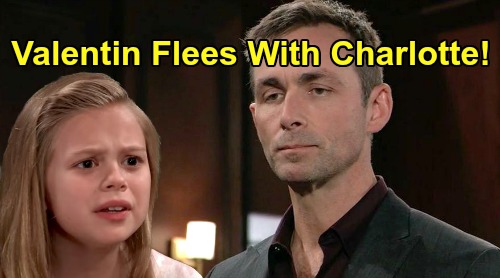 General Hospital (GH) spoilers tease that Valentin Cassadine (James Patrick Stuart) may take drastic action to salvage what’s left of his life. GH fans can tell that a major downfall’s brewing for Valentin, which could mean losing several things he cares a great deal about. That includes Nina Reeves (Cynthia Watros) since she’s working with Ava Jerome (Maura West) on a plot for revenge.

The Cassadine fortune could also wind up back in Nikolas Cassadine’s (Marcus Coloma) hands, but Valentin’s got a contingency plan cooking up with Martin Gray (Michael E. Knight). Although Valentin adores Nina, his heart could heal in time. Valentin can also make more money and in fact already has this opportunity through Martin. The one thing Valentin simply can’t replace is his beloved daughter.

General Hospital writers seemingly plan to hit Valentin where it hurts based on the clues. Curtis Ashford (Donnell Turner) intends to find Claudette Beaulieu (Bree Williamson), which doesn’t sound good! There’s a good chance Claudette will claim Charlotte isn’t really Valentin’s bio daughter. If Valentin knows this is true and fears he’s going to lose Charlotte, you can bet he’ll work himself into a frenzy.

When Valentin is desperate, he’s capable of anything. Could Jasper “Jax” Jacks (Ingo Rademacher) plot to score dirt on Valentin end in disaster? That’s why he sent Curtis on this Claudette hunt, but bringing Claudette back into the picture may not end well. Think about it. What’s Valentin going to do if he’s on the verge of being separated from Charlotte? He’ll probably do what he did the last time that was on the verge of happening.

In 2017, Valentin’s Chimera project dealings came to light and he was forced to go on the run. Lulu Spencer (Emme Rylan) only had visitation at the time, but she was still a mess after Valentin took off with Charlotte. Valentin arranged for fake passports and other documentation. He coached Charlotte on the game they would play all the time, which meant pretending to be Gaspar and Genevieve LeBlanc. Their first stop was near Niagara Falls and the next was set to be Canada.

That plan fell through, but a similar one came about after Valentin’s derailed wedding to Nina. He briefly intended to take Charlotte to Greece – although he basically shrugged off any custody wars with Lulu. Valentin suggested it would be a losing battle for Lulu that would take years, so he wasn’t worried.

Of course, things will change if Valentin isn’t Charlotte’s biological father. Lulu could absolutely win a custody battle against Valentin – but only if she can find him. Based on Valentin’s track record, we have every reason to believe he’ll try to make a quick getaway with Charlotte. Lulu may fear she’ll never see her daughter again!