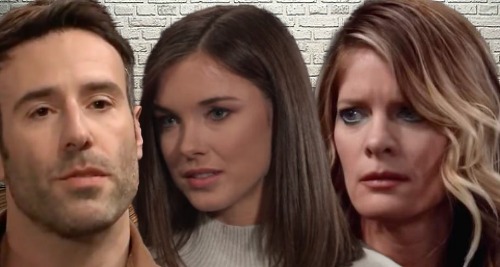 General Hospital (GH) spoilers tease that Willow Tait (Katelyn MacMullen) will find herself in grave danger. She did everything she could to get out of town without coming face to face with evil Shiloh Archer (Coby Ryan McLaughlin). Sadly, it wasn’t enough. Shiloh was able to track Willow down at the elementary school, which means her nightmare just got a whole lot worse.

When Shiloh arrived, Willow was just about to erase “Ms. Tait” from the chalkboard. He creepily insisted she shouldn’t do that since it was such a nice name. That’s undoubtedly how Willow was able to avoid detection for so long. “Willow” is likely her Dawn of Day name since Shiloh recognized it and it fits with their earthy vibe. The “Tait” part must be what she changed to avoid getting caught by Shiloh.

There’s a chance Willow’s real name will become significant. If you weren’t convinced Willow was Nina Reeves’ (Michelle Stafford) true daughter before, surely you are now. After Willow and Nina’s latest confrontation, there’s pretty much no way Nina’s daughter is anyone else. Since Willow was resigning and had nothing left to lose, she made it clear that Nina was one horrible stepmother!

Willow disapproves of Nina’s mothering skills, which is a huge tipoff that Nina is actually Willow’s mom. Of course, there are several secrets surrounding Willow and the son she believes is still alive. Willow will work to keep Shiloh out of the loop on “Wiley Cooper-Jones,” the child she assumes they conceived together.

That’s really Jonah Corinthos, so there’ll be some interesting Michael Corinthos (Chad Duell) developments, too. Nina has inserted herself into the situation by matchmaking for Michael and Sasha Gilmore (Sofia Mattsson). She’s trying to set up Michael with her fake daughter, but it seems her real one is the girl he truly wants.

This is an easy strategy to connect all these GH stories for some upcoming revelations. Since Michael will inevitably try to help Willow, Nina may be concerned about Sasha losing her shot. She could meddle even more and learn what Willow’s up against. That might make Nina soften toward Willow just a tad.

However, the massive shift will come when Nina realizes the whole truth. You can bet Nina will forget all about her issues with Willow and want to build a relationship with her. The problem is Shiloh is a menace. Willow is apparently part of the trust circle, so she knows too much. That’s why it was a big no-no for her to leave DoD – and why Shiloh’s been desperate to find her.

General Hospital spoilers say Willow’s life could be at stake. After all, there have been stories about other Dawn of Day members who died under mysterious circumstances. Shiloh has no qualms about using lethal tactics and let his followers take the blame.

As for Willow’s real name, perhaps that’ll play a role in tracing her family history later. One way or another, Nina will likely learn Willow is her biological daughter. She’ll just have to hope she’s not too late. Nina may soon fear that Willow will die before she ever gets an opportunity to know her!