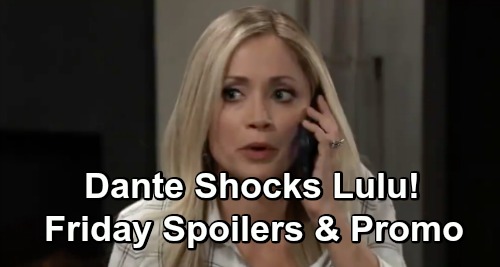 General Hospital (GH) spoilers for Friday, March 22, tease that the backlash will continue for Dr. Kevin Collins (Jon Lindstrom). He’s already been facing plenty of criticism for his role in unleashing Ryan Chamberlain’s (Jon Lindstrom) terror on Port Charles. Now it looks like Dr. Griffin Munro (Matt Cohen) has joined the outrage party. There’s a good chance he’s the one who blindsided Kevin with that punch.

Kevin will be out cold in Friday’s episode. Griffin may have a few things to get off his chest, so it’s possible he’ll wake Kevin up to say them. Then again, Griffin might be too disgusted to give Kevin his time. He knows that without Kevin’s ill-advised plan, Kiki Jerome (Hayley Erin) and Ryan’s other victims would still be alive.

GH spoilers say Ava Jerome (Maura West) will remain in a downward spiral as she speaks with someone. She’ll insist she’s protecting this person, so maybe Griffin will be the one she’s talking to. Laura Webber (Genie Francis) and Anna Devane (Finola Hughes) thought a conversation between Griffin and Ava might be helpful. Ava needs another broken heart to comfort her own.

Nevertheless, Ava may not be keen on opening up. She might think it’s best if they just avoid the topic of Kiki and move on. Whatever the case, Griffin will indeed be moving on since this Friday, March 22,  marks his last airdate. General Hospital spoilers say Griffin’s exit will be open-ended, so it looks like he’ll just leave town to cope with his pain and anger.

Over with Margaux Dawson (Elizabeth Hendrickson) and Jordan Ashford (Briana Nicole Henry), they’ll discuss Kevin’s actions. Margaux will call Kevin a liability and most likely contend the PCPD shouldn’t have anything more to do with him. She may think GH should cut Kevin loose as well, but that’s not up to her unless she can find some charges that’ll cause legal drama.

Regardless, Kevin’s situation will go from bad to worse. Next, Laura will seek updates from Jordan. She’ll wonder if the cops are closing the Ryan case and giving up the search. It’s not wise to accept Ryan’s presumed death again, but Jordan may think that’s the right call for now.

Elsewhere, Brad Cooper (Parry Shen) will leave Julian Jerome (William deVry) suspicious. He’ll make a comment that leads Julian to believe there’s more to the story. When Julian asks if there’s something Brad isn’t telling him, Brad will look uneasy. Of course, GH fans know Julian’s missing an important piece of the baby swap puzzle. He doesn’t realize Nelle Benson (Chloe Lanier) is the one who handed over her kid.

Brad may cover his blunder and keep that tidbit to himself. It’s too risky to share it since Michael Corinthos (Chad Duell) would want his son back if the truth got out. In Willow Tait’s (Katelyn MacMullen) classroom, she’ll blast her former mentor. Creepy Shiloh Archer (Coby Ryan McLaughlin) just approached Willow, but she’ll try to show no fear – even though she’ll actually be terrified!

Willow will warn Shiloh that he’d better back off. She’ll insist that she’ll use what he’s done against him if he doesn’t. However, Shiloh probably won’t be worried. Willow was raped, but Shiloh may not see it like that. He might argue that Willow wanted it, but she’ll fire back about Shiloh seducing her and manipulating her with his mind games.

Meanwhile, Sam McCall (Kelly Monaco) will be under plenty of pressure. She’ll be concerned about making a wrong move and destroying Kristina Corinthos-Davis (Lexi Ainsworth) in the process. Sam will want to keep Jason Morgan (Steve Burton) and Sonny Corinthos (Maurice Benard) in line for her sister’s sake.

Speaking of Sonny, he’ll reunite with Carly Corinthos (Laura Wright) on Friday. She’ll be glad he’s safe and sound after that dangerous trip to Turkey. Carly will admit there was some trouble while Sonny was gone. She’ll fill him in on all the Ryan chaos and how Jason saved her from an untimely death.

At Lulu Falconeri’s (Emme Rylan) place, she’ll suspect a break-in as she frets to someone on the phone. Instead, it appears Lulu will get a warm reunion with Dante Falconeri (Dominic Zamprogna). General Hospital viewers won’t want to miss these long-awaited “Lante” scenes.

It looks like another excellent episode’s on the way. We’ll keep you posted as other GH news comes in. Stay tuned to the ABC soap and don’t forget to check CDL often for the latest General Hospital spoilers, updates and news.