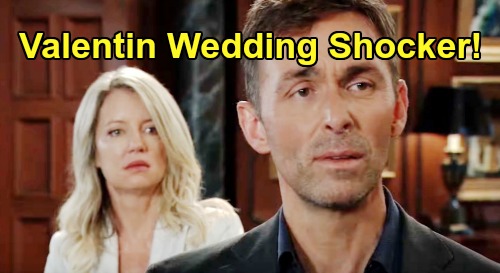 General Hospital (GH) spoilers tease that Nina Reeves (Cynthia Watros) could have a few more tricks up her sleeve. She’s determined to have Jasper “Jax” Jacks (Ingo Rademacher) at her wedding, but why is GH focusing on this? Could Nina eventually have a major surprise in store for Valentin Cassadine (James Patrick Stuart)?

GH fans know Valentin has hurt Nina time and time again. He was trying to make Nina’s dream come true with his last lie, but enough is enough. Nina’s fed up with all the deception, so the fake daughter scheme was the last straw. Simply backing out of the wedding may not hurt Valentin as much as Nina wants to hurt him. It would be humiliating for Valentin, but Nina’s looking for true vengeance.

Nina will inevitably have a hard time going through with this due to her deep love for Charlotte Cassadine (Scarlett Fernandez). She knows how much Charlotte wants them to be a happy family – and part of Nina wants that, too. Even so, Nina has committed to getting the last laugh. She’ll need an excuse to dump Valentin at the altar. What’s the worst thing Nina could do to get revenge?

GH History Could Repeat Itself

General Hospital writers often pull from other stories to write for different couples. Is there an old storyline that could be used to break up Valentin and Nina? Connie Falconeri (Kelly Sullivan) was engaged to Sonny Corinthos (Maurice Benard) and although she had a split personality, Nina could use Connie’s idea to end things with Valentin.

Would Jax be willing to help Nina pay Valentin back for all the lies? He just might! Nina may have a plan to make sure Valentin’s suffering involves plenty of jealousy.

Jax truly cares for Nina and would probably do anything to aid her split from Valentin. Based on their interactions so far, Jax would also love the chance to date Nina and possibly have a future with her. What lengths would Jax go to in order to have that chance? He could make an extremely bold move for Nina’s sake.

General Hospital fans know Nina can be pretty impulsive. She also knows how to strike and do the most damage. Valentin has already shown signs of jealousy when it comes to Nina’s bond with Jax. What would hurt Valentin more than for Nina to marry Jax and reveal it later to destroy his dreams?

Jax is well aware of the fact that Connie did something similar to Sonny, so perhaps he could even suggest it. Would Nina go this far to pay Valentin back for lying about her daughter? Jax and Nina could easily pull this off if they wanted to strike the worst possible blow.

Nina could end up with an even bigger reason to want Jax at her wedding by the end of all this. Will Valentin and the guests get a huge shock? Will Nina already be married to Jax by then? Even if Nina ultimately goes another route instead, you can bet Jax will play an important role in what comes next.