General Hospital Spoilers: No Means No, Sam Is Still Shiloh’s Victim – Doesn’t Deserve Blame for Trying to Save Other Women 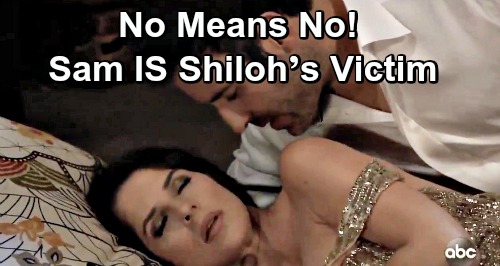 General Hospital (GH) spoilers tease that Sam McCall’s (Kelly Monaco) latest storyline has left fans divided. Sam allowed herself to be drugged as part of a plan to take Shiloh down, but she had a positive goal in mind. Some viewers suggest Sam deserved to be sexually assaulted for trying to save other women. Whatever happened to empowerment?

Sam took this case to save Kristina Corinthos-Davis (Lexi Ainsworth) from Shiloh Archer (Coby Ryan McLaughlin) and his Dawn of Day cult. She wanted to get Kristina out, and with the help of Jason Morgan (Steve Burton), Sam did just that. Of course, Sam had no idea that Kristina had left the pledge about Alexis Davis (Nancy Lee Grahn) with Shiloh.

Sonny Corinthos (Maurice Benard) believed the trust offering was about him, so Sam volunteered to keep up the ruse and hopefully get the pledge back. However, Sam wanted more. She was determined protect others from being raped by Shiloh through these initiations. Sam was even willing to risk herself to get the evidence she needed.

Does that mean her repeatedly saying no doesn’t count? Did Sam deserve to be raped for trying to help others? No means no, and nobody deserves to be raped. After Kristina’s initiation was cut short, she wasn’t taken to GH because of the need to deprogram her. She never would’ve agreed to a blood test because she wouldn’t have gone against Shiloh at the time.

After Willow Tait (Katelyn MacMullen) recounted her ordeal, Kristina realized the truth that others had tried to explain. Unfortunately, that doesn’t help much now that the drugs are out of Kristina’s system and it’s her word against Shiloh’s. Willow also can’t be tested for drugs, and her deceased child can’t be tested to prove he belongs to the cult leader. She could talk about her ordeal, but there’s no proof.

Sam had to take it this far because she needed documented evidence of Shiloh’s crimes, and she didn’t want to put anyone else in danger. General Hospital viewers can tell that putting herself in this position has taken a lot out of Sam. It’s also taken her back to 2011 when Franco Baldwin (Roger Howarth) sexually assaulted her.

Sam has every right to be upset by what happened with Shiloh. She believed for years that she was raped, and she was led to believe that her son belonged to her rapist. Sam still carries a lot of pain from that time, and Shiloh undoubtedly brought it back to the surface. If anyone has a right to cry, Sam does.

Sam was simply a private detective doing her job, so there’s no need to blame the victim. Neither Sam nor any other woman deserves to be raped – no matter what circumstances led them to that situation. General Hospital spoilers say Sam will continue to struggle with trauma, but she’ll keep her mission going as well. With another assist from Jason, Sam will do everything she can bring Shiloh down once and for all!

GH fans won’t want to miss “JaSam” in action this summer. We’ll give you updates as other news comes in. Stay tuned to the ABC soap and don’t forget to check CDL often for the latest General Hospital spoilers, updates and news.