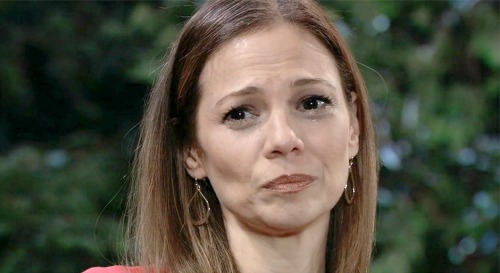 General Hospital (GH) spoilers tease that Drew Cain (Billy Miller) and Dr. Kim Nero (Tamara Braun) will have to find a way forward. They’ll try to get some closure on Oscar Nero Quartermaine’s (Garren Stitt) death, but it’ll be hard for both of them. After Kim and Drew scatter Oscar’s ashes on Mt. Kilimanjaro, they’ll head home and face the difficult reality of this loss.

The Mt. Kilimanjaro mission may serve as Kim’s last form of hope. There’ll be no more final wishes to carry out or gestures she believes would please Oscar. Drew tends to have a strong grip on his emotions, so he’ll be able to deal with this blow. He’ll use more positive coping strategies, but Kim may turn to some incredibly negative ones. It sounds like she could really fall apart in the months ahead.

General Hospital spoilers say Kim will do something extreme as she tries to deal with her grief. Her move will have a huge impact on Drew’s life as well as Julian Jerome’s (William deVry). Kim paid Shiloh Archer (Coby Ryan McLaughlin) a visit not too long ago, but she wasn’t interested in his philosophies. She appreciated hearing about Oscar, but she’s not the least bit curious about what DoD has to offer.

Of course, it would add drama to the story if that changed. What might cause the shift? Perhaps the move we mentioned that’ll affect Julian and Drew profoundly. There’s a chance Kim joining Dawn of Day could be shocker that’s brewing, but how will GH get Kim from point A to point B? They may need a different shocker to put Kim in an even more vulnerable place.

Since Kim’s going to turn to negative coping strategy, it’s possible she’ll rely on drugs to numb her pain. This could easily lead to an accidental overdose or even an intentional one. Could Kim attempt suicide? Will she ultimately feel like she has nowhere left to turn? That might drive her to DoD, even if Julian and Drew offer repeated warnings.

Then again, General Hospital might scrap Kim’s involvement at DoD and just let her heal with Drew. The storyline could be more about pulling Kim away from Julian. Regardless, a suicide attempt could be the catalyst for major changes in Kim’s life.

Some tough moments are in Kim’s future, so let’s hope she gets the support she needs! We’ll give you updates as other GH news comes in. Stay tuned to the ABC soap and don’t forget to check CDL often for the latest General Hospital spoilers, updates and news.