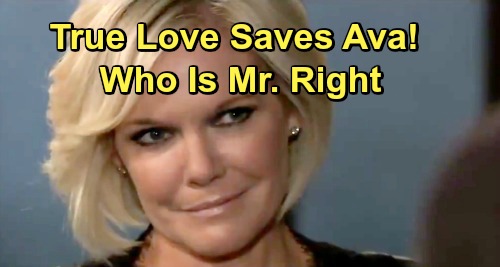 General Hospital (GH) spoilers tease that Ava Jerome (Maura West) will remain a mess in the coming weeks. Julian Jerome (William deVry) keeps having to come collect his drunken sister, so he’ll think she needs to get grip. Unfortunately, Ava will be reluctant to accept help. She dismissed Dr. Kevin Collins’ (Jon Lindstrom) therapy suggestion as well, so she’ll just have to tackle this alone for a while.

GH viewers can expect more conflict between Ava and Carly Corinthos (Laura Wright) on April 9. General Hospital spoilers say Ava will provoke Carly somehow, so she’d better be careful. Carly’s trying to cut Ava some slack since she’s been through a lot, but she did offer a warning. She made it clear that she’d use Ava’s plastered meltdowns against her in a custody battle if need be.

Carly has to put Avery Corinthos (Ava and Grace Scarola) first, so she won’t hesitate to take Ava down if she can’t be a decent mom. Of course, losing time with Avery might really send Ava over the edge. That’s the last thing she needs right now, so let’s hope it doesn’t come to that.

Ryan Chamberlain (Jon Lindstrom) is the reason for all Ava’s current problems, but it doesn’t look like he’s gone for good. That may not be such a bad thing since Ava so desperately wants to kill him and GH fans want to watch! Sadly, that would only bring a temporary high for Ava. She may get her revenge, but that won’t bring Kiki Jerome (Hayley Erin) back.

Ava might end up chasing something she believes will bring her satisfaction, but it’s tough to believe it will. Despite his horrific secrets, Ryan made Ava the happiest she’s ever been. She felt loved and accepted for the first time in her life, so that’s really adding to Ava’s devastation right now. Ava lost her daughter and the man she thought was a kind, devoted fiancé.

How can Ava ever overcome the crushing blows she’s faced? Maybe a new love story is the answer. Ava doesn’t need a moral compass kind of guy like Dr. Griffin Munro (Matt Cohen) used to be. She obviously doesn’t need an insane murderer like Ryan in her life either. Ava has to find someone who can inspire her to be a better person without dragging her down for her mistakes.

General Hospital could always introduce a new character to fill that spot in Ava’s heart. If they want to work with what’s on canvas, Scott Baldwin (Kin Shriner) and even Dr. Neil Byrne (Joe Flanigan) might be options. The latter would be a great move if GH intends to inch Alexis Davis (Nancy Lee Grahn) back toward Julian.

That steamy “Julexis” love scene got a lot of support, so anything the writers had in mind for Neil and Alexis might’ve been ditched. Neil and Ava just might work! It would tie right in with the therapy angle since Ava might want to chat with Neil in an informal setting. Perhaps just opening up about her struggles to a friend would be easier than a genuine therapy session.

Whatever the case, Ava needs a different path or she’ll just keep spiraling. Is true love the only thing that can save her? Would you like to see a real romance to replace Ava’s manipulated love story with Ryan? We’ll give you updates as other GH news comes in. Stay tuned to the ABC soap and don’t forget to check CDL often for the latest General Hospital spoilers, updates and news.